Wozniacki dumped out of French Open by Hantuchova; Stosur humbled 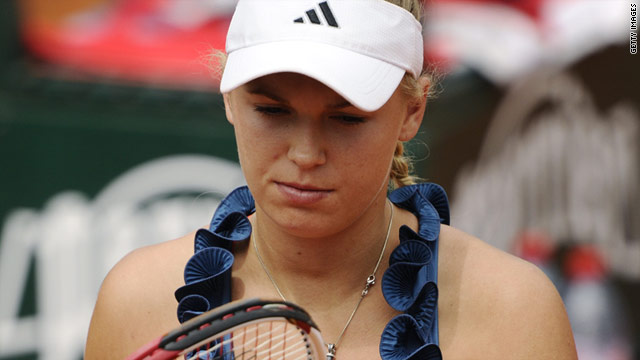 Caroline Wozniacki's misery in Grand Slam's continued as she was knocked out of the French Open by Daniela Hantuchova.
STORY HIGHLIGHTS

(CNN) -- World number one Caroline Wozniacki suffered another morale-sapping defeat at the French Open as she was dumped out by 28th seed Daniela Hantuchova.

The Dane, who is yet to win a Grand Slam tournament, was beaten 6-1 6-3 in just 73 minutes to extend her miserable run at Roland Garros.

Her best performance in Paris was reaching the quarterfinals in 2009 and she struggled against Hantuchova, from Slovakia, who was competing in her 41st major.

Hantuchova reeled off nine straight games to seal the opening set and take a commanding lead in the second but Woznaicki offered herself hope when she secured her first break to reduce the deficit to 4-2.

But Hantuchova held serve twice to seal one of the biggest victories of her career and set up a meeting with 2009 champion Svetlana Kuznetsova in the last 16, after she beat Canadian Rebecca Marino 6-0 6-4.

"She played very well today, better than me for sure," Wozniacki told a press conference. "She knew what she wanted to do and I need to get back on the court and practice and come back stronger.

"I am young and I get experience every time and you learn more from your losses than from your wins."

After Wozniacki's exit, and Kim Clijsters defeat on Thursday, the trend for upsets continued as Australian 8th seed Samantha Stosur was beaten by unseeded Gisela Dulko.

The Argentine set the tone by taking the first four games of the match, and though she dropped the second set, Stosur's 35 unforced errors counted as Dulko wrapped up the match.

Afterwards, she told a press conference she was dedicating her victory to her brother's twins, Myla and Teo, who were born overnight.

"Yesterday night I was awake really late," she said. "You know, it was very emotional, because I would have loved to be there, but I'm here. The key to the match was to start well, to be aggressive from the start,"

Stosur added: "She seemed to be out ahead a little bit better and really kind of be the one dictating the points, which, for me, I'm usually the one able to do that."

Elsewhere, defending champion and fifth seed, Francesca Schiavone, from Italy, had no such trouble making the fourth round after her Chinese opponent Shuai Peng retired hurt with the score at 6-3 1-2.