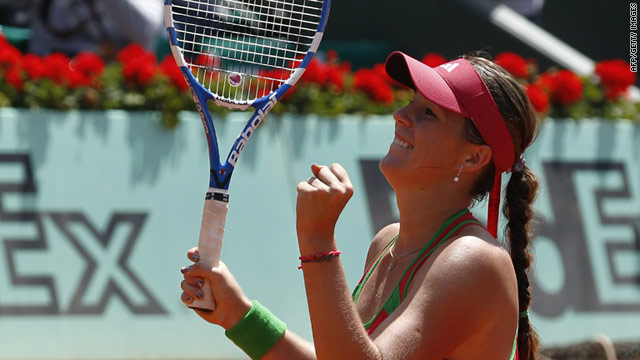 (CNN) -- Third seed Vera Zvonareva has become the lastest big name to crash out of the French Open at Roland Garros, beaten in three sets by fellow-Russian Anastasia Pavlyuchenkova.

Following the exits of the top two in the world, Caroline Wozniacki and Kim Clijsters, Zvonareva was the highest-ranked player remaining in the draw.

But 14th seed Pavlyuchenkova proved too strong on the day, reaching the last eight with a 7-6 2-6 6-2 victory.

Sharapova strolls into fourth round

The defeat of Zvonareva, who reached the finals of both Wimbledon and the U.S. Open last year and the semifinals of this year's Australian Open, leaves fourth seed Victoria Azarenka of Belarus as the highest-ranked player left in.

"It's my first Grand Slam quarterfinal and it means a lot to me especially beating Vera," Pavlyuchenkova told reporters after her victory.

"I knew it would be tough. She is very experienced and fights until the end. My dream is to win Roland Garros at least once."

Pavyluchenkova will now face defending champion Francesca Schiavone of Italy for a place in the semifinals, after the fifth seed edged past former world number one and 10th seed Jelena Jankovic of Serbia 6-3 2-6 6-4.

The 30-year-old Schiavone, who was claiming her 11th straight victory on the Paris clay, is bidding to become the first woman to defend her Roland Garros title since Justine Henin achieved the feat in 2007.

Also through to the last eight is 11th seed Marion Bartoli, who became the first French woman to reach the Paris quarterfinals here since Mary Pierce in 2005, after unseeded Argentine Gisela Dulko retired with a thigh injury while trailing 7-5 1-0.

Bartoli will now face 13th seed and former champion Svetlana Kuznetsova in the quarterfinals, after the Russian -- the 2009 champion -- recovered from the loss of the opening set to go through 6-7 6-3 6-2.