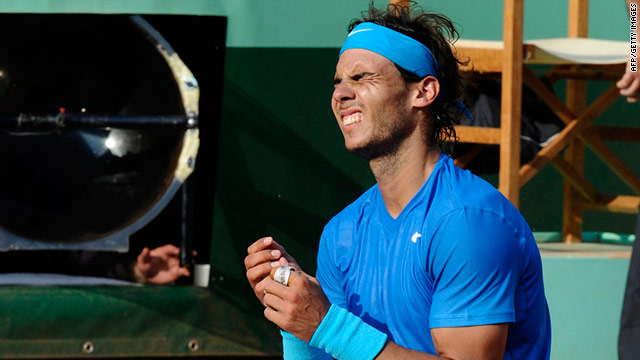 Top seed Nadal, who was taken to five sets by John Isner in his opening match, found his form the longer the tournament went on, and played majestically to overcome his old adversary and third seed 7-5 7-6 5-7 6-1.

The Spaniard has still only ever lost once in Paris, to Robin Soderling in 2009, the year that Federer went on to win his only French Open title.

Swiss maestro Federer came into the final on the back of a superb last four success over Novak Djokovic, consigning to Serb to his first defeat in 2011.

However, he was always playing catch up against clay king Nadal, who only faltered in the third set, when losing three games in a row when poised to seal a straight sets victory at 5-4.

The defeat for Federer, means the 29-year-old has lost every one of the four Roland Garros finals against Nadal.

The 25-year-old Nadal has now won 10 grand slam titles in his career, level with American Bill Tilden, and retains his place as number one in the world rankings -- a position that was under threat by Djokovic going into the second grand slam of the season.

Speaking after his victory, an emotional Nadal said: "This tournament is really something very special and exceptional for me.

"One of my biggest dreams has come true. I'm very moved right now. Thanks to all the fans who make this tournament the best in the world and thanks to my family who travel with me around the world and make it all possible."

Federer was generous in defeat, adding: "It was an exceptional performance by Rafa. He's beaten me again. I'm sad but I am happy to play him.

"He is the best player on clay. I am proud of the way I have played over the last two weeks but I couldn't do enough against him. It was important to get into another grand slam final."

The final was held up for 10 minutes because of a slight rain delay, the only rain there has been in the whole of the tournament, and Federer told the official ATP Tour website: "When I went into the rain delay, I was down basically two sets.

"I almost saved myself, but I'm very competitive, and I thought he was getting tired throughout the third set and also in the fourth.

"It was unfortunate I couldn't take my chances early on in the fourth. Rafa played well and deserved the win."