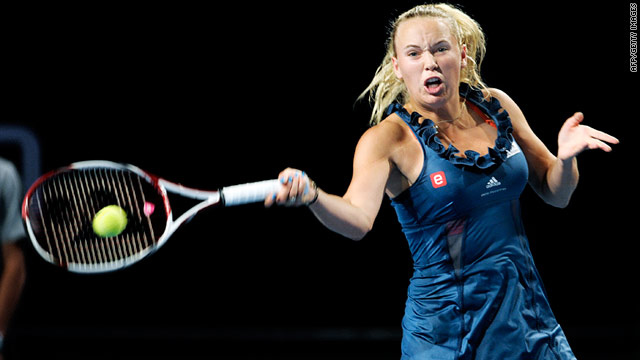 Caroline Wozniacki won the 17th title of her senior career as she retained the Copenhagen Open title.
STORY HIGHLIGHTS

(CNN) -- World No. 1 Caroline Wozniacki claimed her fifth tennis title this year as she retained her Copenhagen Open title at home in Denmark on Sunday.

The 20-year-old brushed aside Czech fourth seed Lucie Safarova, winning the final of the indoor hardcourt event 6-1 6-4 in an hour and eight minutes.

Wozniacki did not drop a set throughout the week as she avenged last year's defeat on clay in Stuttgart in their only previous meeting.

"Congratulations to Lucie for a good week and reaching the finals," Wozniacki told reporters after clinching her 17th career success. "I wish her good luck in Eastbourne and in the grass-court season -- hopefully we can both make it far at Wimbledon."

Can Serena Williams succeed in her long-awaited comeback?

Wozniacki has decided against playing a grass warm-up tournament ahead of the start of Wimbledon on June 20, despite having never got past the fourth round of the season's third grand slam event.

Safarova, seeking her first title since 2008, was unable to continue the battling form that saw her come from a set down in her four other matches -- including a 6-1 4-0 deficit against Petra Martic in the semifinals.

"I'm disappointed, but it was a great week for me and I will be back next year," Safarova said. "Congratulations to Caroline, she played really well today. It must be great for her to win at home -- I can only imagine. I wish her all the best."

The 24-year-old is one of 32 players in the field for next week's event in the south of England, which is headed by world No. 3 Vera Zvonareva, French Open winner Li Na of China and her Paris final opponent Francesca Schiavone.

The Williams sisters Serena and Venus will make their long-awaited returns from injury.

Meanwhile, the two grass-court tournament finals scheduled in Britain this weekend were postponed due to wet weather.

World No. 4 Andy Murray was due to play France's Jo-Wilfried Tsonga in the men's AEGON Championships at London's Queen's Club, while Germany's Sabine Lisicki was to take on Daniela Hantuchova of Slovakia at the women's Birmingham Classic.

The final of the Gerry Weber Open in Halle was able to be played, with Philipp Kohlschreiber winning his third ATP Tour title on home grass in Germany.

The world No. 49 was handed victory when 71st-ranked compatriot Philipp Petzschner was forced to pull out with a back injury while trailing 7-6 (7-5) 2-0.

"Every day I played a great match. Of course, the final ended quite short, but overall the week was great and to win in Germany is fantastic," said Kohlschreiber, who beat defending champion Lleyton Hewitt in the quarterfinals and then defeated third seed Gael Monfils.