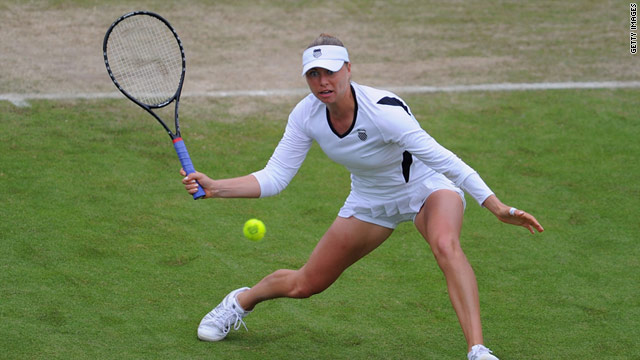 (CNN) -- Serena Williams has been beaten in her comeback event in Eastbourne, losing a tight three-set second round match to top seed Vera Zvonareva on Wednesday.

American Williams has not played in a competitive tournament since defeating Zvonareva in the Wimbledon final a year ago.

However, the Russian claimed some revenge for that loss, recovering from dropping the opening set to secure a 3-6 7-6 7-5 triumph after three hours of intense tennis.

Zvonareva, who has been seeded second for Wimbledon next week, paid tribute to Wiliams after the match, telling the official WTA Tour website: "Serena has done an unbelievable job coming back after almost a year of not playing.

"She spent more than three hours on the court playing some unbelievable tennis. She's a great champion and I have a lot of respect for her."

Williams was appearing in Eastbourne for the first time after two operations on a foot she cut on broken glass in a restaurant, followed by further surgery in February to remove blood clots from her lungs.

Venus, who has been out of action for five months with an abdominal injury, went through 6-3 6-2 and told the WTA Tour website: "I was happy to have some clean service games and not a lot of errors.

"I feel I'm playing well on the big points -- these matches have been crucial for me to get back, literally, into the swing of things."

Top seed Jo-Wilfried Tsonga, from France, who was betean in the final at Queen's by Andy Murray, lost 6-2 6-3 to Czech Radek Stepanek.

Meanwhile, American Sam Querrey, who won at Queen's in 2010, has been forced to withdraw from Wimbledon due to an arm injury.