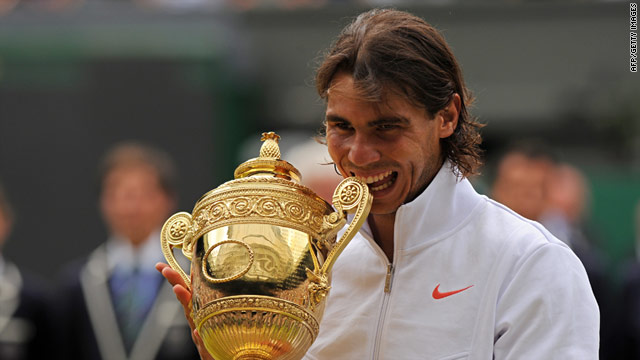 Rafael Nadal must face Michael Russell in the first round as he attempts to retain his Wimbledon men's singles trophy.
STORY HIGHLIGHTS
RELATED TOPICS

(CNN) -- Defending champion Rafael Nadal must take on American Michael Russell in his opening match at Wimbledon next week, after the draw was revealed on Friday.

Top seed Nadal has been drawn in the same half as fourth seed Andy Murray, who he is expected to meet in the semifinals.

British number one Murray takes on another Spaniard, world number 56 Daniel Gimeno-Traver, in his first round match.

However, the most intriguing match of the opening round sees American John Isner face Frenchman Nicolas Mahut in a repeat of last year's epic duel between the pair.

Recently, Isner told reporters: "That match will never be equalled, it won't happen again, not even coming close."

Meanwhile, in the women's section, the possibility of a fifth all-Williams final remains alive after Serena and Venus were kept apart in the draw.

In Friday's action, heavy rain put paid to both the men's and women's semifinals in the Eastbourne tournament in England.

However, play was possible at the semifinal final stage of the grasscourt event in 's-Hertogenbosch, Netherlands.

Meanwhile, the women's final will be between Italian seventh seed Roberta Vinci, who beat Slovakian fifth seed Dominika Cibulkova 7-5 6-1, and Australian Jelena Dokic, whose Italian opponent Romina Oprandi retired injured while trailing in the other semifinal.