Federer: I can beat Djokovic anywhere 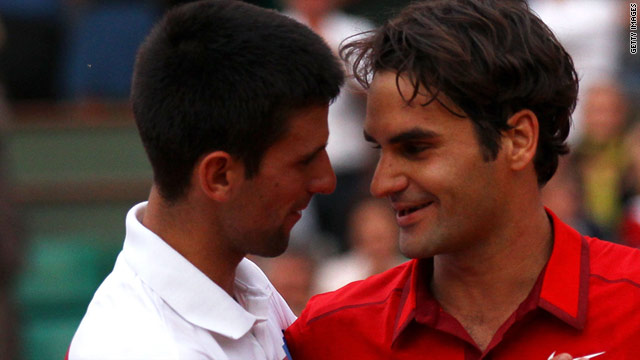 (CNN) -- Roger Federer is confident he can beat Novak Djokovic again if he meets the world No. 2 in the semifinals of a grand slam for the fourth time in a row at Wimbledon.

The third seed ended Djokovic's 43-match winning run at the French Open two weeks ago, but failed to add to his record 16 major titles as he lost to top-ranked Rafael Nadal in the final.

Federer is again in the same half of the draw as the Serbian as he seeks to equal Pete Sampras' leading seven Open Era crowns at the English grass-court event, where he opens his campaign against Kazakhstani debutant Mikhail Kukushkin next week.

It will be the Swiss star's first match on grass since his shock quarterfinal defeat by Tomas Berdych at Wimbledon in 2010, as he pulled out of last week's warm-up tournament in Germany due to a groin problem suffered at Roland Garros.

I didn't necessarily need to prove my point in Paris. I know I can beat Novak on any surface
--Roger Federer

"The first time I hit here on Monday, very easily, like right away after 10 minutes, it feels so natural for me to play on grass. I hope that feeling is going to pay off by going deep and then hopefully winning the tournament here," Federer told the tournament's website on Saturday.

"I'm happy about my game, and I am happy it showed in Paris. I played a wonderful match against Novak, and also all the other matches before that were good. Obviously I come into this tournament very confident.

"I feel good about myself, about my body. I've recovered. The last week was vital for me to recover from my groin injury. I feel like I'm almost back at 100% again, which is a really good sign for Wimbledon."

Why Murray's Wimbledon mission is unlikely to succeed

Djokovic beat Federer on the way to winning the Australian Open in January, and also triumphed in the semifinals of the 2010 U.S. Open before losing at the same stage to his rival at the season-ending ATP World Tour Finals in London.

"I didn't necessarily need to prove my point in Paris for my mind or for my confidence. I know I can beat Novak on any surface," Federer said.

"I've done that in the past. Just because he's on a great winning streak doesn't mean he's unbeatable.

"That was my mindset going into the match in Paris. I played really well. I was able to play well in the key moments. Here at Wimbledon anyway, I'm even more confident. I think I'm a better player than in Paris, so I expect myself to do really well here, even better maybe."

Federer said the world's top-four players had similar chances of winning the title at Wimbledon, where No. 4 Andy Murray is seeking to become the first British champion since Fred Perry in 1936.

"But this year it seems like all of us are, which is a good thing. Murray's game is very natural for this surface. I think Djokovic has always been great, but nothing extraordinary yet. But with the run he's on, obviously there's a lot of possibilities for him as well here."