Williams sisters 'the ones to beat' at Wimbledon 2011 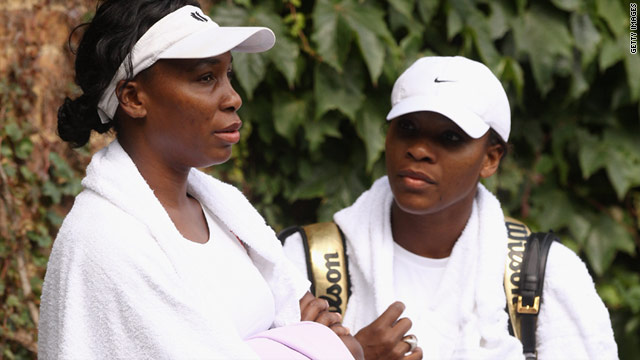 (CNN) -- World No. 1 Caroline Wozniacki is looking to win her first grand slam crown. Maria Sharapova, one of her predecessors as the top women's tennis player, is returning to the scene of her breakthrough title.

Both players are adamant that their biggest obstacles to success at Wimbledon this year will be the Williams sisters Serena and Venus.

The Americans are back on the scene after varying but significant absences.

Serena, a four-time champion at the English grass-court grand slam, is playing just her second tournament since winning last year's final -- her second triumph in a row in south-west London.

Can Serena Williams succeed in her comeback bid?

The 29-year-old has spent the past 12 months recovering from a freak foot injury, cutting it in a restaurant and then facing a near-death situation as blood clots formed in both lungs. Her return at Eastbourne last week ended in a second-round loss to Vera Zvonareva, who avenged her 2010 Wimbledon final defeat.

Venus, a five-time Wimbledon champion, reached the quarterfinals in her first tournament since retiring hurt with a hip injury at January's Australian Open.

Both sisters are predictably rusty, but are still among the bookmakers' favorites to reach the final on July 2 along with Sharapova, French Open champion Li Na and -- further down the list -- Wozniacki.

Sharapova, who stunned Serena as a 17-year-old in the 2004 final, is wary of the Williams' vast experience at the tournament.

"They've been champions here for many years. They're obviously the ones to beat on grass," the Russian told reporters ahead of her bid to win a fourth grand slam title.

"They've been out for a while so it's definitely great to have them back."

Serena Williams 'back from death bed'

Fifth seed Sharapova could meet Serena -- who is No. 7 despite her slip in the rankings -- again in the semifinals, though she may have to beat Wozniacki to get that far.

The 20-year-old Dane is a former junior Wimbledon champion but has never made it past the fourth round in the senior ranks.

"We all know that the game of the girls is perfectly suited for the grass. It's good that they got a higher seeding than their rankings because no-one wants to play them in the early rounds," Wozniacki said of the Williams duo.

"I'm very happy that Serena's doing well again. I don't wish for anyone to be in that situation because it's scary. Serena and Venus are great girls, I have a good relationship with them."

Wozniacki begins her campaign against Spain's 107th-ranked Arantxa Parra Santonja, who has never made it past the second round at Wimbledon.

Sharapova will open against compatriot Anna Chakvetadze, once ranked as high as fifth in the world after reaching the semifinals of the 2007 U.S. Open but now 50th as she seeks to rebuild her career.

"I'm playing a lot better. I played a lot of matches on clay, which I really wanted to do. One of the reasons I love the transition is because I feel like you learn so much about the game when you're on the clay courts," said this month's French Open semifinalist.

"This is one of the best parts of the year for me. It's one of the toughest transitions from clay to grass, but for me it's a lot of fun."

Seventh seed Serena has been handed a potentially tricky tie against Aravane Rezai of France, while 23rd seed Venus faces Akgul Amanmuradova of Uzbekistan in the other half of the draw.

Meanwhile, Marion Bartoli boosted her hopes of a repeat of her 2007 Wimbledon exploits by winning her first grass-court title at Eastbourne on Saturday.

The French world No. 9, beaten by Venus Williams in the final that year, defied an potentially worrying leg injury in cool, windy conditions to beat Czech fifth seed Petra Kvitova 6-1 4-6 7-5.

Due to Friday's washout, they both played two matches as Bartoli beat Australian seventh seed Samantha Stosur 6-3 6-1 and Kvitova went through when Slovakia's Daniela Hantuchova retired with a stomach injury while trailing 7-6 (11-9) 4-2.

Tipsarevic, the world No. 30, is in doubt for Wimbledon after injuring his groin, the UK Press Association reported.

Now ranked 59th, Dokic will play French Open runner-up Francesca Schiavone in the first round at Wimbledon, where she reached the semifinals in 2000, while Vinci takes on Russia's Vera Dushevina.