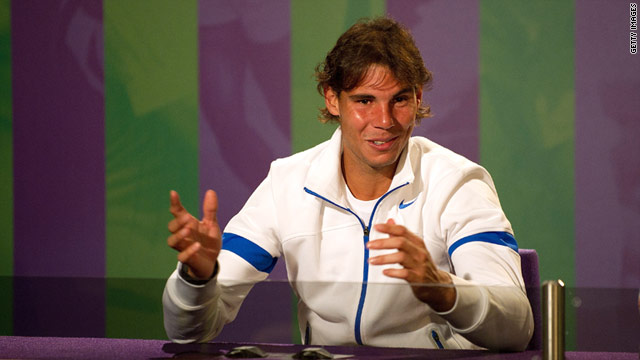 Rafael Nadal was in relaxed mood on the eve of his Wimbledon title defense.
STORY HIGHLIGHTS

(CNN) -- On the eve of his Wimbledon title defense, Rafael Nadal claimed it will be "impossible to repeat" his triple grand slam success of last year.

Nadal opens on Centre Court Monday against American Michael Russell and comes to the All England Club off the back of a sixth French Open triumph earlier this month.

But the 25-year-old Spaniard told gathered reporters Sunday that his chances of adding the Wimbledon and U.S. Open titles to his haul were remote.

"Last year was in my opinion very impossible to repeat -- three grand slams in a row," Nadal said.

"I am very happy about what's going on this season. But I don't think I will repeat what I did last year for sure."

Victory at Wimbledon will give Nadal his 11th grand slam title and close on the record 16 of arch-rival and third seed Roger Federer, but again the world No.1 tried to downplay expectations.

"We can dream about a lot of things. For me it's a dream. Maybe not for you."

Nadal beat Federer in the final at Roland Garros as he continued his invincible form on Paris clay, but has now adapted his game to the faster grass of SW19.

"In the beginning of my career everybody talked a lot that with my style of game it's gonna be very difficult to play very well here," he added.

"The only problem of grass sometimes, is if you play against a big, big server, because the game is too fast and it's not nice to play because you feel that for a lot of games you don't touch the ball."

"I don't have the volley of Roger, for sure. But I think I'm fast and my movements are enough good to go to the net. I have a good enough volley to do it," he said.

Meanwhile, defending women's champion Serena Williams believes she has her work cut out to repeat the triumph, particularly after being sidelined for nearly a year with injury and serious illness.

Williams and her elders sister Venus returned to competitive action at Eastbourne last week and were impressed by current standards on the WTA tour.

"There's so much depth in women's tennis. It's good. Everyone's playing so hard.

"No one wants to go down. You get match point, doesn't matter, you got to really focus. Everyone's playing tough," she told gathered reporters.

Serena and Venus have won nine Wimbledon singles title between them and one of them has appeared in 10 of the last 11 finals at the grass court grand slam.