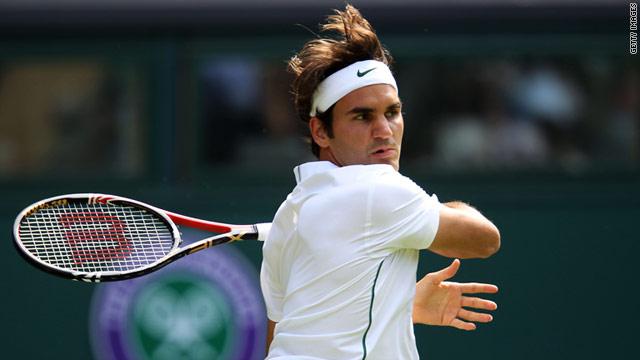 Swiss tennis star Roger Federer made light of gusty winds to move into the second round at Wimbledon.
STORY HIGHLIGHTS

(CNN) -- Roger Federer began his bid for a record-equaling seventh Wimbledon title with a straight-sets victory in his opening match in windy conditions in England on Tuesday.

Federer will next play France's 55th-ranked Adrian Mannarino as he seeks to join Open Era record-holder Pete Sampras and William Renshaw (1881-1889) at the top of the grass-court event's roll of honor.

"The first rounds here at Wimbledon on Centre Court are never easy," he told the ATP Tour website.

"They're somewhat nerve-wracking because you don't get a chance to practice on the Centre Courts here. So I'm happy I was able to come through in three sets this time around."

Federer was playing his first event since ending Novak Djokovic's 43-match winning run at the French Open, where he then lost in the final to Rafael Nadal.

"It feels like if things go well for me I can go extremely far here, whereas at Roland Garros I feel it's a bit more on other opponents' rackets," the 16-time grand slam champion said.

"But here I feel it's a bit more on mine. That's why I'll always play with some pressure here at Wimbledon just because of the occasion and what it means to me. I was nervous going out in today's match."

Federer: I can beat Djokovic anywhere

World No. 2 Djokovic bounced back to winning ways in his first match since his Paris disappointment, beating unseeded Frenchman Jeremy Chardy 6-4 6-1 6-1 in one hour and 20 minutes on Centre Court after Federer's match.

The Serbian, seeking to reach his first Wimbledon final, won 14 of the last 16 games to set up a second-round clash with big-serving South African Kevin Anderson or Ukraine's Illya Marchenko.

"When this streak ended in Paris, it was kind of a relief because it's been a very successful five or six months for me, but very long as well and exhausting," Djokovic said.

"I've played so many matches. So I needed some time to relax, and I'm happy to see that I'm playing well again and that I'm mentally really fresh to have more success.

"I'm very satisfied with the way I started the tournament. This performance was great. My serve was very accurate in quite difficult conditions for both of us because we had to face the strong wind."

The 22-year-old Argentine will next face Belgium's Olivier Rochus as he seeks to reach the third round for the first time.

Croatia's 27th seed Marin Cilic crashed out along with Serbia's Janko Tipsarevic, who suffered an injury, and Russia's Nikolay Davydenko.