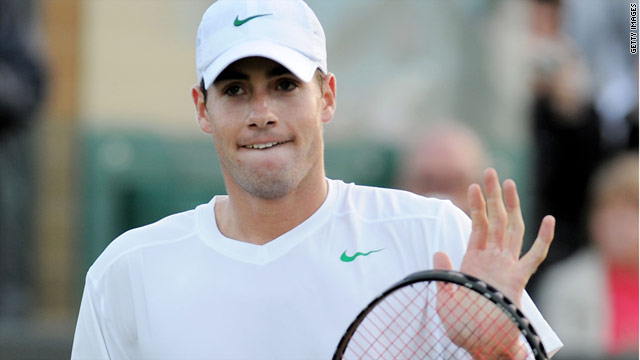 John Isner acknowledges the crowd at Wimbledon after beating Nicolas Mahut for the second year in a row.
STORY HIGHLIGHTS

(CNN) -- After just two hours and three minutes, John Isner stepped off the grass of Wimbledon's new No. 3 court a very relieved man on Tuesday.

This time last year it took the American three days to win his record-breaking clash with Nicolas Mahut on court No. 18 in the longest match in tennis history, lasting just over 11 hours.

Somehow fate conspired to have the duo drawn together again in the opening round, and the sporting world was watching to see if the agony would be repeated.

Memories of the longest match in tennis
RELATED TOPICS

"It wasn't easy but obviously it was considerably quicker than last time. I was happy how I played, especially in the third set," the 26-year-old told reporters.

"I was thinking if I lost that set we probably wouldn't be able to finish, and then it would have been the match going into a second day and people would have been talking about maybe a third.

"I'm glad they put us out on this court. I don't know if they wanted to tarnish the memory of what happened on Court 18. It was unlikely it would live up to that match. It's a huge relief."

After the first set went to a tie-break, it looked as if another titanic serving battle was on the cards. But Isner broke the Frenchman in the fourth and sixth games of the second set, winning it in just 26 minutes.

Mahut had the chance to reduce the deficit after breaking in the third game of the third set, but Isner repaid the favor and had the edge in the tie-break to win it in 50 minutes.

It was 47th-ranked Isner's first match since losing a five-set thriller to world No. 1 Rafael Nadal in the first round of the French Open last month, where Mahut fell at the same hurdle.

Isner will hope he has more in reserve for his second-round match than last year at Wimbledon, where he predictably wilted in straights sets against Dutchman Thiemo de Bakker after his marathon effort.