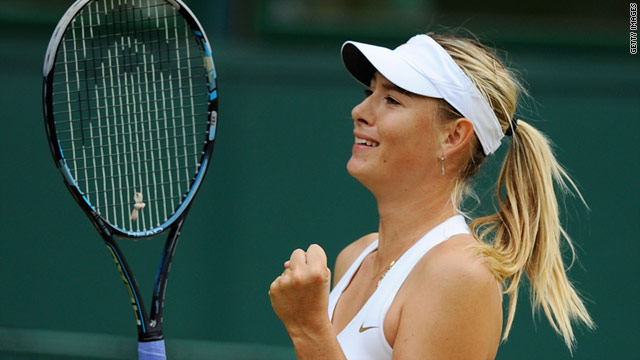 Russia's Maria Sharapova is back in the ladies final at Wimbledon for the first time since 2004.
STORY HIGHLIGHTS
RELATED TOPICS

(CNN) -- Maria Sharapova powered her way to a first Wimbledon final in seven years after she brushed aside Sabine Lisicki to set up a meeting with Petra Kvitova.

The Russian claimed her first ever Grand Slam title as a 17-year-old back in 2004 and recovered from an early wobble against German wildcard Lisicki to triumph 6-4 6-3.

Standing in between Sharapova and the fourth major championship of her career will be Kvitova, from the Czech Republic, after she beat Belarusian fourth seed Victoria Azarenka 6-1 3-6 6-2.

Sharapova told reporters after her match: "It's amazing to be back in the final at Wimbledon, it's been a while.

"I'm really happy even though I didn't play my best tennis today. To be in the final is a great achievement for me but I still feel like I've got more to do."

The final looked a long way off when the fifth seed slumped to 3-0 down in the opening set, after a series of untimely double faults handed Lisicki the advantage.

But when the German squandered a chance to go into a 4-0 lead Sharapova burst into life and took six of the next seven games to secure the first set.

Sharapova on her brand and inspirations

She then raced into a 5-1 lead in the second before Lisicki secured a break of service to give her a lifeline, but it was quickly snuffed out as the Russian broke back immediately to secure her place in Saturday's showpiece final.

Kvitova, who lost in the semifinal stage last year to Serena Williams, is the first left-handed player to reach the final since compatriot Martina Navratilova in 1990, and the 18-time major champion was watching on from the royal box.

The eighth seed took a mere 27 minutes to secure the opening set, breaking her opponent's serve twice and registering six aces on her way to a 6-1 success.

But Azarenka -- the highest seed left in the final four -- recovered her composure and roared back into contention in the second set, securing two breaks to take it 6-3.

That setback only inspired Kvitova to greater heights as she grabbed the initiative with a 3-1 lead in the decider and watched as Azarenka served a double fault to hand her victory.

She told reporters: "I saw Martina (Navratilova) in the locker room and she wished me good luck. I'm so happy but I don't really believe I am in the final. This is the best day of my life."

I'm so happy but I don't really believe I am in the final. This is the best day of my life
--Petra Kvitova

"I started really well, all match it was about serve so I was happy mine went well in the third set. In the beginning it was close but after I broke her, I played well and she was a little bit down I think.

"She played very well in the second set and it was tough after that but I tried to play it as if it was a normal game and not the Wimbledon semifinal."

Azarenka acknowledged she was beaten by the better player and said Kvitova is well capable of securing an upset against the favorite Sharapova.

"I probably could have played better but when I had chances she really came up with the good stuff," she said.

"I think she can beat anybody any day, because right now she has a really good game. She's really going for it. If she's going to play like this, like she played today, I'm sure she has all the chances to win the next match."