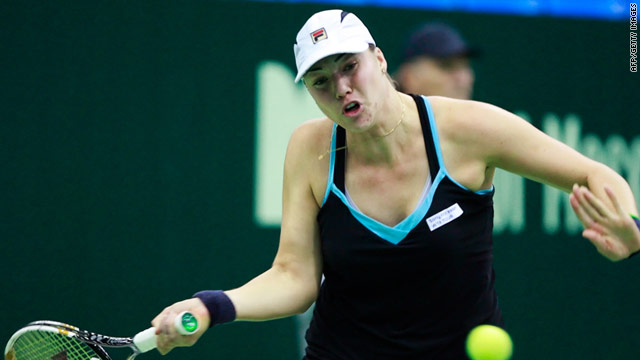 Alisa Kleybanova has revealed she is undergoing treatment in Italy for Hodgkin's Lymphoma.
STORY HIGHLIGHTS

(CNN) -- Russian tennis star Alisa Kleybanova has released a statement confirming she has been diagnosed with cancer.

Kleybanova, who is ranked 28th in the world, chose her 22nd birthday to reveal that she is suffering from Hodgkin's Lymphoma.

In the statement, which was published on the official WTA Tour website, Kleybanova said: "It's not an easy time for me right now. I've been a bit unlucky with my health. I have Hodgkin's lymphoma, a form of cancer."

She continued: "I've been having treatment in Italy and it has been going well, but it takes lots of patience and I've had to be really strong to go through this.

"The good news is after I have treatment for a few more months, if I feel well, there's a chance I'll be able to play tennis again."

The statement added: "There are a few reasons I'm undergoing treatment in Italy. First, I have a training base and many close friends here, so it's like home.

It's not an easy time for me right now...I have Hodgkin's lymphoma, a form of cancer
--Alisa Kleybanova
RELATED TOPICS

"Secondly, they have a really great hospital here that specializes in this problem. I've been going there since the problem started, so the doctors know me well. It's the best place for me to be, the surroundings help me stay strong," she added.

"I'm sure I'll be able to overcome this -- it's just a matter of patience and time. When this is over, everything will be even better than it was before."

Kleybanova, whose best grand slam performances came at Wimbledon in 2008 and the 2009 Australian Open, has already been inundated with messages of support from her fellow-players.

Germany's Julia Gorges wrote on her Twitter site: "girl i wish u all the best", while Britain's Laura Robson also tweeted: "Wishing Alisa Kleybanova all the best as she battles Hodgkin's Lymphoma. Will miss her on Tour, great player and lovely person."

Meanwhile, the WTA also released a statement, adding: "The thoughts of the WTA and the entire tennis family are with Alisa and her family at this difficult time.

"Alisa is a very strong and optimistic person and we wish her a speedy and full recovery."