Blake battles back in Atlanta, sets up Isner clash 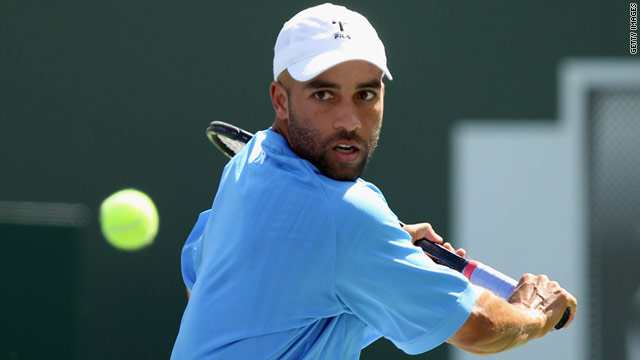 (CNN) -- American James Blake overturned a one-set deficit to defeat Ernests Gulbis 5-7 7-6 (7-5) 6-2 in the opening round of the Atlanta Tennis Championships.

Gulbis, 22, served for the match with a 5-4 advantage in the second set, but Blake, a former world number four, fought back to force a tie break and eventually take the match.

Blake, currently 91st in the rankings, secured a decisive service break when leading 3-2 in final set, and will now face compatriot John Isner in the second round.

Isner, who finished runner-up at the 2010 event, is seeded third at the tournament and was therefore not required to play in the first round.

Mardy Fish, the American number one who is ranked nine in the world, also received a bye as the championships' top seed, along with Kevin Anderson, seeded second, and fourth seed Xavier Malisse of Belgium.

India's Somdev Devvarman set up a clash with Tatsuma Ito of Japan after a 6-4 3-6 6-4 defeat of home-crowd favorite Ryan Sweeting.

Michael Russell, a quarterfinalist in 2010, also notched up a straight-sets triumph as he beat Donald Young 6-0 6-3 in an all-American contest.

Gilles Muller of Luxembourg was another winner on day one, as the 28-year-old progressed at the expense Alex Bogomolov Jr. 6-3 7-6 (8-6).