Hewitt safely into Atlanta second round 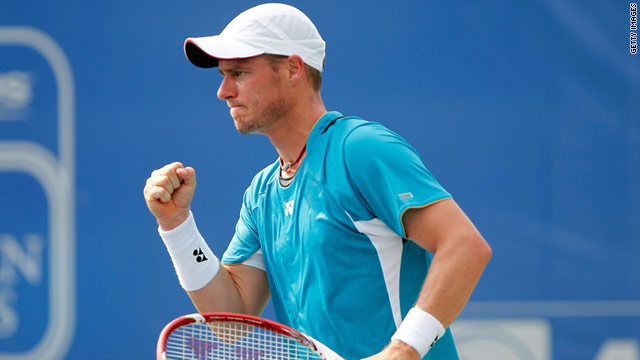 (CNN) -- Australian Lleyton Hewitt has advanced to the second round of the Atlanta Tennis Championships thanks to a 6-4 6-4 defeat of American wild card Phillip Simmonds.

The 30-year-old broke Simmond's serve on three occasions on his way to a straight sets victory over the world number 428 -- who was playing in just his third ATP World Tour-level event.

Hewitt, a two-time grand slam winner and a former world number one, will face Rajeev Ram next, after the American qualifier upset number five seed Grigor Dimitrov with a 6-4 6-4 triumph.

Blake battles back in Atlanta

Ginepri, a former world number 15, is playing in his first tour-level event since the 2010 U.S. Open after recovering from a long-standing elbow injury.

The 28-year-old's reward is a second round clash with Gilles Muller of Luxembourg.

American Ryan Harrison managed to see off Japanese qualifier Yuichi Sugita 6-1 7-6 (7-5), despite only converting two of his 13 break points.

Harrison, 19, will now meet Xavier Malisse, after the Belgian fourth seed received a bye in the first round.

Frenchman Nicolas Mahut set up a clash with defending champion and American number one Mardy Fish after a 7-6 6-2 win against 115th-ranked Richard Berankis of Lithuania.

Meanwhile, top seed Gael Monfils of France beat Spanish qualifier Albert Ramos 6-4 6-2 to reach the third round of the German Open in Hamburg.

The only seed to tumble on Wednesday was ninth-seeded Serb Janko Tipsarevic, who was brushed aside 6-2 6-4 by Argentina's Juan Monaco.