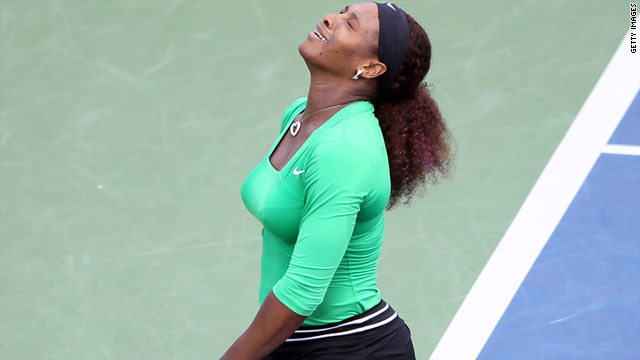 Serena Williams has struggled with injury and illness in the last year, but has recently regained her form.
STORY HIGHLIGHTS

(CNN) -- Former world number one Serena Williams has withdrawn from the Western and Southern Open in Cincinnati with a toe injury.

The 29-year-old, a winner of 13 grand slam titles, was due to face Australia's Samantha Stosur in the second round of the Lindner Family Tennis Center event.

The American has struggled with illness and injury over the past year, but was impressive in winning last week's Rogers Cup tournament in Toronto -- ironically beating Stosur in straight sets in the final -- and was on a 12-match winning streak.

The world number 31 was disappointed to pull out of the event, but said she was not willing to risk her fitness ahead of the U.S. Open later this month.

Can anybody stop Novak and Serena?

I'm definitely disappointed, but at the same time I have a lot to look forward to
--Serena Williams
RELATED TOPICS

"It's not nearly extreme, it's just a bit of an aggravation because I think I've been pounding it a lot and playing a lot," Williams told the WTA's official web site.

"I don't think this is a good time for me to take a big chance. I just don't think that's smart. I'm definitely disappointed, but at the same time I have a lot to look forward to."

French Open winner Li Na will be Stosur's opponent in the next round after the fifth seed eliminated the Czech Republic's Lucia Safarova with a 6-3 6-4 win.

Top seed Caroline Wozniacki also endured a difficult day as she was knocked out by wildcard Christina McHale.

McHale, who at 19 is the youngest player in the world's top 100, notched up a 6-4 7-5 victory against the number one ranked Dane, who admitted to making a large number of mistakes.

"I think I made 37 unforced errors -- normally I'm seven or eight in a match," the 21-year-old said. "It happens. You have good patches and some rough patches.

"I'm going to come back and win a lot of matches in the future. Of course I'm disappointed and I would have liked to win, but it's only this week. Life goes on."

McHale will play Nadia Petrova in the quarterfinals, after the Russian beat former world number one Ana Ivanovic 6-3 7-6.

Vera Zvonareva is the highest-ranked player left in the draw, the second seed set up a last-eight tie against Petra Martic with a 6-3 6-0 defeat of fellow-Russian Ekaterina Makarova.