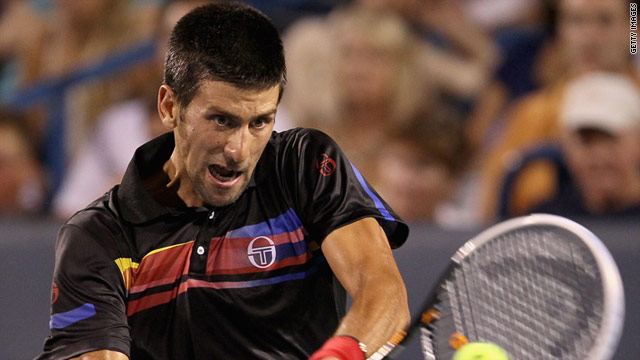 Novak Djokovic goes looking for his third grand slam of the year at the U.S. Open in New York.
STORY HIGHLIGHTS

(CNN) -- World number one Novak Djokovic could face Roger Federer in the semifinals of the U.S Open after the pair were grouped in the same side of the draw Thursday.

Djokovic, the top seed, has lost only twice in 2011, and has already clinched the Australian Open and Wimbledon titles this season. He has been drawn to play a qualifier in round one.

Switzerland's Federer, who has clinched glory at Flushing Meadows on five previous occasions, begins his campaign with a clash against Colombian Santiago Giraldo.

Defending champion and second seed Rafael Nadal will face Andrey Golubev of Kazakhstan as the Spaniard goes in search of an 11th career major.

Is Wozniacki feeling the weight of world number one?

Nadal told the U.S. Open's official web site: "I feel great. I am here, and I will try my best. Last year was a really emotional year for me.

I feel great. I am here, and I will try my best. Last year was a really emotional year for me
--Rafael Nadal
RELATED TOPICS

"It was the tournament I didn't play my best in the past. Last year, I played one of my best matches in the final. I finally won."

British number one Andy Murray, defeated by Djokovic in January's Australian Open final, will come up against Somdev Devvarman of India.

The top-ranked American in the draw is Mardy Fish, and the 29-year-old eighth seed will look to eliminate German Tobias Kamke in the opening round.

Vera Zvonareva, ranked second in the world, has been drawn against a qualifier, while 2006 winner Maria Sharapova has been paired with Britain's Heather Watson.

Li Na, winner of the French Open, will have to get the better of Romania's Simona Halep, while Wimbledon champion Petra Kvitova is up against another Romanian Alexandra Dulghera.

Serena Williams has claimed victory at this event three times during her career, and her latest title tilt will commence against Serb Bojana Jovanovski.