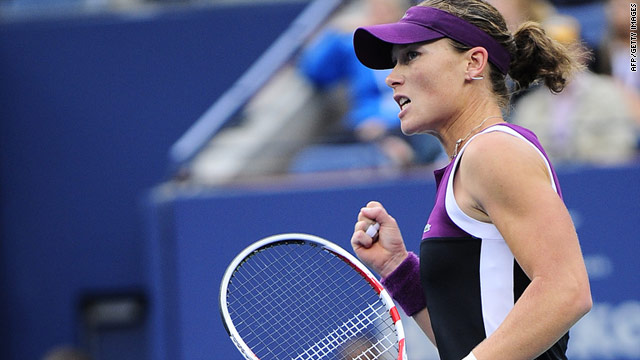 Samantha Stosur proved too strong for favorite Serena Williams, as she powered to an impressive U.S. Open win.
STORY HIGHLIGHTS

Williams, bidding for her fourth U.S. Open crown, had gone into the match as a hot favorite despite a troubled year blighted by injury and serious illness.

But Stosur never allowed the American, who was cheered on by a patriotic New York crowd on the 10th anniversary of 9/11, to settle -- claiming a spectacular 6-2 6-3 triumph in 73 minutes, as Williams lost her cool following a contentious umpiring decision.

"I had one of my best days and I'm very fortunate that I had it on this stage in New York," Stosur said after the match.

"Ever since I started playing, it was a dream of mine to be here one day, and now my dream has come true."

Stosur, whose run to the final included a marathon third-round victory over Nadia Petrova that lasted a tournament record three hours and 16 minutes, continued: "Serena, you are a fantastic player, great champion and have done wonders for our sport.

Don't even look at me -- If I see you in the corridor, don't even walk past me
--Serena Williams to umpire Eva Asdaraki

Although she was only seeded 28th, Williams came into the tournament bang in form after winning two warm-up events -- including victory over Stosur in the final of the Rogers Cup in Toronto.

And the American was mightily impressive in dismantling world number one Caroline Wozniacki in the semifinals, while ninth seed Stosur struggled to beat unseeded German Angelique Kerber in three sets in the other semi.

With emotions high among New Yorkers, on a poignant day for the city, a Williams win looked set to provide the United States with a fitting end to a difficult occasion.

But Stosur, whose only previous Grand Slam final appearance came last year when she lost the French Open to Francesca Schiavone, did not read the script, dominating the opening set against the 13-time Grand Slam champion, who had reached this stage without dropping a set in the tournament.

Stosur broke Williams to lead 2-1 and then won the last 12 point of the set in an impressive display of pace and power.

Then came the talking point of the match. Williams had already saved one break point in the first game of the second set.

However, on the second break point, the American shouted "come on" as she unleashed a fierce forehand before Stosur had reached the ball.

Umpire Eva Asdaraki immediately penalized Williams for "intentional hindrance," and the point and the game went to Stosur.

Williams reacted angrily to the decision and was then given a code violation for verbal abuse.

The American immediately broke back and then held serve but continued to berate the umpire at the changeover, as her composure ebbed away.

I had one of my best days, and I'm very fortunate that I had it on this stage in New York
--Samantha Stosur

"Don't even look at me -- If I see you in the corridor don't even walk past me," shouted the 29-year-old. "A code violation for expressing my opinion?, we're in America -- you're unattractive inside"

Stosur then broke serve to take a 4-3 lead and broke Williams again to clinch a famous victory -- becoming the first Australian women's winner at Flushing Meadows since Margaret Court in 1973.

When asked about the incident after the match, Williams said: "I was just doing my best. I hit a winner but I guess it didn't count. It wouldn't have mattered anyway because Sam played really well and she is a great player."

Australia's Samantha Stosur produces one of the biggest shocks in U.S. Open final history.
The curse of the women's No.1

Reaching the top of the world rankings in your chosen sport is the pinnacle of achievement; with it comes fame, fortune and a place in history.
Nadal's cramp tip of the iceberg?

As Rafael Nadal collapsed in front of a press conference, it seemed for a moment as if the U.S. Open was about to claim its most high-profile casualty.
Is Wozniacki feeling the pressure?

CNN's Candy Reid asks if Caroline Wozniacki would benefit from being knocked off her perch ...
Flushing facts: 10 things to know ...

With the final grand slam of the year underway at Flushing Meadows in New York, here are 10 U.S. Open facts you might not know.