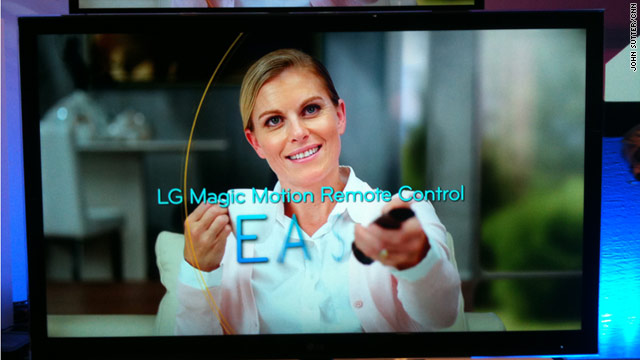 Companies such as LG Electronics are focusing not on thinner TVs but on what viewers see from the front.
STORY HIGHLIGHTS

Las Vegas (CNN) -- The tech-industry hype last year was that TV sets were becoming thinner than ever -- with some particularly anorexic models getting down to just millimeters in width.

Well, maybe that was a little unhealthy, manufacturers have decided.

This year at the Consumer Electronics Show in Las Vegas, the TV makers are saying that this is skinny enough -- if not a little too slim. Instead of shrinking their waistlines even further -- a la Rachel Zoe -- the TV companies are looking to other gimmicks and wow! factors to set their television screens apart from hundreds of others here.

In doing so, they're talking up TV features that average American TV viewers likely never have heard of.

Take LG, for example. At a press conference on Tuesday, the South Korean electronics manufacturer talked about its TVs' "bezels."

The best of CES

The latest in gadgetry from CES

CES coverage: The year of the tablet
RELATED TOPICS

Bezel, you say? LG is referring to that border around the edge of the TV screen. Its picture frame, essentially. That thing you look at all the time and never noticed.

Those bezels are too fat, LG declared. The company and others here are out to slim them down -- pronto.

"We think, at a certain point, thinness doesn't matter anymore," said Tim Alessi, LG's director of new product development. "We've been focusing more on what people see from the front."

The company's new plasma TV bezels slimmed down from 1 inch last year to about three-quarters of an inch this year, he said.

It's impossible for TV makers to completely eliminate that border, Alessi said, but that's the longterm goal of TV manufacturers, said Gary Merson, editor of HDGuru.com.

TVs will need super-strong glass to slim down the bezels, he said.

And that could have other benefits.

"When the kids' Wii remote goes flying into the TV screen, it bounces off. Nothing happens -- instead of going right into the LCD," Merson said.

Other companies are focusing on size.

According to Mitsubishi, it does matter.

At a CES preview event on Tuesday, the company showed off a 92-inch 3-D TV, which it says will be the largest commercial 3-D television on the market when it goes on sale later this year.

When it comes to 3-D, larger images are clearer, said Nick Norton, a company spokesman. (At about $6,000, such a set is also more expensive).

What do you think about 3-D technology? Share your thoughts

In this way, TV manufacturers are trying to approximate the feeling of watching a 3-D movie in a theater, which has turned effects-laden movies such as "Avatar" and "Alice in Wonderland" into blockbuster hits.

Others are focusing on what's actually on the screen.

At a press conference on Wednesday, Panasonic talked up how deeply black the black hues on their screens are.

"We have been known for having among the best black images in the industry," said Jim Sanduski, senior vice-president at Panasonic.

The company announced a new screen technology called the "infinite black 2 panel," on the ST30 series of TVs.

All of these features are intended to improve the home TV-viewing experience and catch the eyes of journalists and would-be consumers.

But the reality is that most people who buy TVs won't get the latest model from the Consumer Electronics Show -- or at least not this year, said Patrick Miller, an editor at PC World who covers television news.