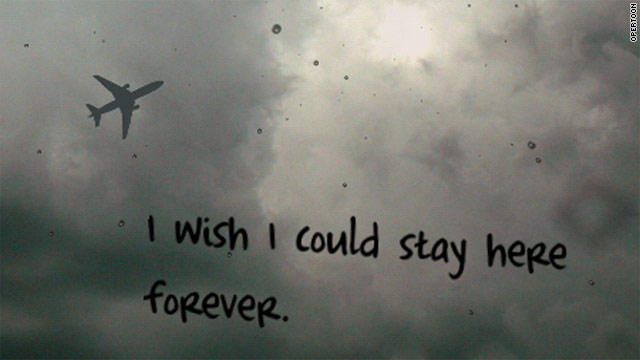 (CNN) -- It's become a top-selling entertainment app for the iPad and iPhone and has been featured by Apple in its online store.

But for "Strange Rain," one question remains, even among those who have downloaded and enjoyed the application since it debuted last month.

What exactly is it?

"The easiest way to describe it is that it's a portable rainy day," said Erik Loyer, the app's Santa Clarita, California-based creator.

But the app, available so far only for Apple products but being considered for Android and other platforms, is more than that. "Strange Rain" is a unique mashup of game, short story, easter-egg hunt and ... what? Meditation tool, maybe?

"It's almost like a David Lynch movie," said Mike Riley, a blogger who has reviewed mobile apps and features for more than a decade, referring to the director of mind-bending classics such as TV's "Twin Peaks" and the movies "Blue Velvet" and "Mulholland Drive."

"It can be categorized as a game because it has to have some category, but I would say it's more like an experience."

A former video-game developer who attended film school at the University of Southern California, Loyer said he was looking through some desktop prototypes he'd developed as he pondered a project that would take advantage of mobile touchscreen capabilities.

His two kids liked one in which 3-D triangles hurtled toward the screen and, after taking a second look, he says he imagined those triangles as raindrops.

In its most basic mode, "Strange Rain" depicts a stormy sky with raindrops spattering on the touchscreen. Tapping the screen in various combinations prompts music and, as the user progresses, more bizarre events.

In "whispers" mode, seemingly random words appear along with the rain. And in "story," taps reveal snippets of a first-person story, written by Loyer, in which a man stands outside in the rain for reasons that slowly become more apparent.

The choices the player makes can change the storyline along the way.

Loyer said he's been pleasantly surprised at the way people say they use the app.

At one point last week, "Strange Rain" was the No. 1 paid entertainment app for the iPad in the United States, Canada and New Zealand. It's also among the top-selling entertainment apps for the iPhone, although its appeal may be less apparent on that device's smaller screen.

Riley, who reviewed the app, said his only criticism (more a "hopeful recommendation," he said) is that there's not more content in the story mode. In his review, he suggested a mode that would let players upload their own stories.

That, along with requests for more music, has been the most common feedback from users, Loyer said. He has begun approaching writers about adding more interactive stories to the app.

Loyer also promised other updates are on the way, but he kept a lid on exactly what they might be.

"Strange Rain," developed by Loyer's Opertoon, sells for $1.99 and is available for the iPad, iPhone and iPod Touch.