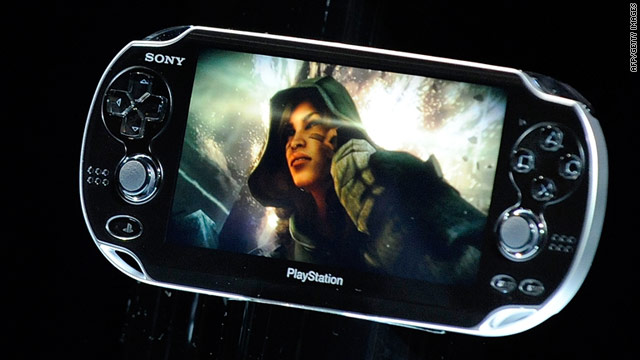 Sony's next PlayStation portable system will have a touch-screen and 3G cell access. It's scheduled for a release late this year.
STORY HIGHLIGHTS
RELATED TOPICS

In addition to cell and Wi-Fi chips for accessing online services, the new PlayStation gadget looks like its predecessor but has a 5-inch touch-screen and a second analog stick, which is useful for controlling first-person shooters like "Call of Duty."

Speaking of which, "Call of Duty," alongside other gun-play franchises like "Killzone" and "Resistance," will have versions for the new system. Other games include "Uncharted," "LittleBigPlanet" and "Wipeout."

Games come on memory cards, and some can be downloaded directly to the device. Sony is doing away with the mini discs it pushed with the original PlayStation Portable.

The new system is tentatively being called Next Generation Portable, or NGP, but that will likely change before it launches late this year.

Weirdly, NGP also has a touch-sensitive pad on the back of the device, which game developers can consider when thinking up all kids of wacky applications. Motorola, another mobile hardware maker, tried something similar with the Backflip smartphone, but the concept didn't take off.

The PlayStation system's finger-friendly back is really the frosting on an array of sweetly stacked ingredients in this high-tech gadget.

The system has a blazing fast, quad-core processor to help move those graphic-intensive games. It has cameras on the front and rear and a microphone. There are also sensors inside for detecting location and motion, like those found in top-of-the-line smartphones.

With a holiday launch window still quite a long way off, Sony was mum on details such as a firm release date, price and, as you've probably noticed, a definitive name for the thing.

The announcement, made during a news conference in Tokyo, Japan, Thursday, didn't come as a surprise to gadget enthusiasts.

Several images of different hardware concepts leaked to blogs. Peter Dille, a Sony executive, told CNN in October that the current PSP system is limited by not having cell connectivity.

During the news conference, where Sony announced the system, the company also provided some tidbits on a smartphone-focused game platform. Called PlayStation Suite, the software will work on Android devices approved by Sony, which will probably include phones and tablets from Sony Ericsson.

Details were scarce, but the platform would presumably provide phones with access to high-quality games and perhaps movie downloads.

PlayStation phones and the upcoming PlayStation hand-held, with its built-in 3G service, will have a major focus on social networking features, Sony said.