Don't count out the iPad competitors 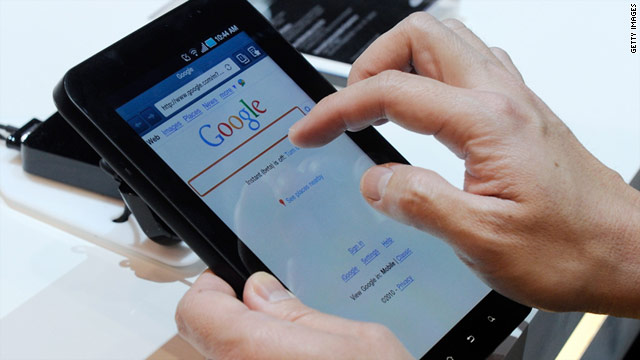 Believe it or not, the Galaxy Tab is running an older version of Android that's designed to run on smartphones.
STORY HIGHLIGHTS
RELATED TOPICS

Editor's note: Adam Ostrow is the editor in chief of Mashable.com.

(CNN) -- Amidst reports that the Samsung may be touting inflated numbers for sales of its Galaxy Tab tablet -- and reports that those that do buy the device are returning it at an alarming rate -- one might jump to the conclusion that Apple has little to be worried about in the way of competitors to its iPad.

However, that would be a mistake.

While Apple sold nearly 15 million iPads in 2010 and closed the year with 75% market share in the tablet space, that was down from 95% in the third quarter of 2010, before the Galaxy Tab went on sale.

And regardless of whether or not the Galaxy Tab is a hit or a dud -- Samsung claims its return rate is actually 2% -- a slew of better Android devices are about to invade the market -- not to mention offerings from other players including RIM and Palm.

One advantage that upcoming tablets like the Motorola Xoom have on the Galaxy Tab is that they'll be using Honeycomb, Google's operating system that's optimized for tablets that was officially revealed on Wednesday.

Believe it or not, the Galaxy tablet is running an older version of Android that's designed to run on smartphones, which essentially renders the device as an awkwardly sized Galaxy S.

Also, let us not forget recent history. It was less than two years ago that pundits were beginning to suggest that Android was a failure. At the time, there were only two Android smartphones on the market, despite the dozens of partners that Google had announced at the launch of Android in late 2007.

To many, the features of the nascent operating system also seemed underwhelming.

Fast forward to today and Android smartphones are outselling iPhones, thanks to the multitude of manufacturers now offering devices at a variety of price points -- all the way down to free.

Gizmodo says: "If you consider where Android was when it started versus how far it's advanced in 18 months with Android 2.2, you might get brain freeze."

All of which should signal that the tablet race is far from over.

The next few months will see not only the introduction of the Xoom, but also devices from manufacturers like LG, Vizio and Acer.

Much like smartphones, having more than one manufacturer to choose from is one of Android's big advantages, as each device offers its own unique features that consumers can weigh when making their selection.

That's no different in tablets, where consumers will be able to choose based on things like operating system, screen size and front-facing cameras, not to mention price.

And price could ultimately prove a huge driver of sales of iPad alternatives. Whereas Apple and its carrier partners, AT&T and Verizon, have thus far offered data plans for the iPad on a month-to-month basis, T-Mobile is enticing customers with a $249 retail price when you sign a two-year data contract for the Galaxy Tab.

While the contract-less iPad has its advantages, namely the ability to switch devices more than every two years, it also means you'll need to drop at least $629 initially to get a 3G version of the tablet.

Meanwhile, much like we saw with netbooks, pricing is likely to drop further -- perhaps all the way to free -- as carriers look to lock in customers on their expensive new 4G data networks and manufacturers churn out devices with lower manufacturing costs -- something Vizio, for example, does well.

An iPad 2 (very likely) and subsidized pricing (less likely) could give Apple another pop in the middle of this year, but make no mistake: The same tides that lifted Android past iOS in the smartphone world will soon do the same with tablets.

That's not to say that Apple won't continue to build a huge, lucrative and ever-growing market for itself, but rather to point out the inevitability of its competitors also cashing in on the tablet craze.

The opinions expressed here are solely those of Adam Ostrow.