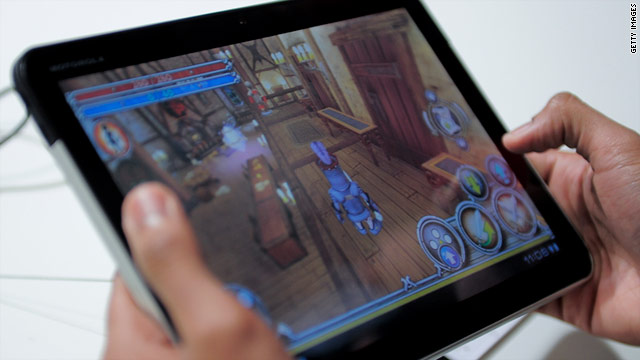 Motorola's Xoom has created competition for Apple's market, but how much?
STORY HIGHLIGHTS
RELATED TOPICS

(WIRED) -- As Sly Stone said, the nicer the nice, the higher the price.The question is, is the more expensive Xoom nicer than the comparable iPad?

The experience is markedly different, that's for sure. Anyone familiar with Apple's market-leading tablet -- and the Xoom invites the comparison -- will face a few moments of disorientation when picking up the Xoom for the first time.

A few details are unsettling to iPad users, such as the location of the power button (on the rear of the device), the lack of front-facing command buttons, and the unfamiliar location of the volume rocker.

Those details will be irrelevant to non-Apple users, of course, but even dedicated Android fans will find that the Xoom's version of the OS, Android 3.0 Honeycomb, takes a bit of getting used to.

Some things don't work the same as they do on older versions of Android. For instance, instead of holding down the (virtual) "home" button to see a list of running apps, there's now a separate icon for displaying a vertical menu of apps. To see the full list of installed apps, you press a separate "apps" button in the upper right of the screen.

And while the lack of front hardware buttons gives the device a cleaner look, it does mean that virtual buttons clutter up the display and rob you of screen space in most applications. It's a tradeoff.

But once you've oriented yourself to Honeycomb's and Xoom's idiosyncracies, what emerges is a tablet that's very well suited to reading and to video.

The Xoom has a 10.1-inch screen (measuring 8.5 by 5.25 inches), and it's as bright and sharp as any other high-end tablet. We did notice a slightly discolored band running down the edge of the screen on one side, but since we can't compare it to other Xooms yet, we don't know if this is a problem with our review unit or a more general manufacturing defect.

The 1280×800 screen is pretty close to a standard widescreen aspect ratio, so videos can fill the whole screen with minimal clipping.

The Xoom is a little bit shorter than the iPad in landscape mode, but that means that when you flip the Xoom to portrait mode, the screen is skinnier and taller. This is actually perfect for reading books, scrolling down web pages, or catching up on Instapaper.

It's comfortable to hold the Xoom with one hand while you swipe with the other, and because the vertical page is so tall, there's less swiping than on smaller screens.

The rubbery back panel has enough grip that you don't really need to clamp onto the thing while you're reading. If you feel fatigued by holding your iPad one-handed for long periods of time like I do, you'll appreciate this.

In short, it's an excellent, basic media consumption device -- as long as your media doesn't rely on stellar audio. If you're planning on zoning out with a movie or a few videos, we'd recommend keeping a decent pair of headphones on hand.

The big problem with the sound? The speakers are in the back of the tablet. They sound fine if you turn the tablet around to face the speakers toward you, but if you're holding the Xoom so you can see its screen, the sound is projecting away from your head. Everything sounds muffled: movie dialog is harder to understand and music just sounds dead and lifeless.

There's an optional dock with speakers built in, but when you plop the Xoom into the dock to watch a movie, the dock speakers sit behind the tablet, too. So it's the same problem all over again, just a little louder.

On the other hand, being able to compose a photo while looking at something bigger than a 5×7 print is a real luxury, as it lets you see details you wouldn't otherwise notice on a small phone screen or camera viewfinder. It's awkward, but we suspect it will become commonplace within a few months now that every tablet is getting a camera built into the back.

With an $800 entry price (or $600 if you're willing to commit to a two-year Verizon data contract at $20 per month), the Xoom is a bigger leap of faith than Apple's market-leading tablet.

Granted, the most comparable iPad -- the one with 32GB of storage and a 3G wireless connection -- costs $730, making it just $70 cheaper than the un-subsidized Xoom. But if you want to sample the iPad, a 16GB Wi-Fi only version is available for $500, and so far Motorola has announced nothing in a comparable price range for the Xoom.

For that reason we think fewer people are likely to jump on the Xoom bandwagon. Those who do will be attracted by the widescreen format, the ability to buy apps without going through Apple's restrictive App Store.

For those who want a more fully-finished, polished experience, however, we recommend waiting for a future Android tablet -- or the iPad. The Xoom is a credible contender, but it's not quite on par with the market leader yet.

Big, widescreen display offers plenty of room for video and for reading. Fast 1-GHz processor promises great performance for future games and apps. Honeycomb simplifies and optimizes the Android interface for tablets. Dual cameras and an optional external keyboard make this a credible notebook (or at least netbook) replacement.

Rear-facing speakers don't do justice to any kind of audio. The button thing is weird. Honeycomb seems to have some bugs to work out. No support for Adobe Flash-based content.