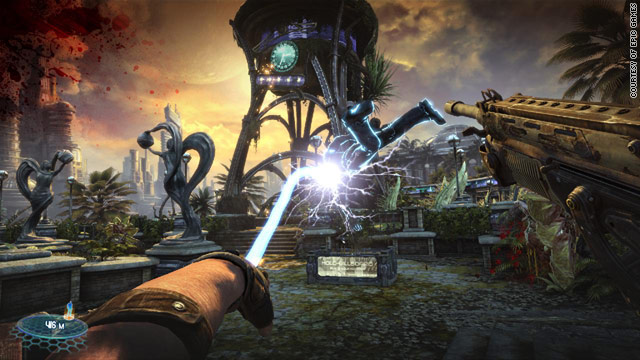 (CNN) -- While most first-person shooter games want players to kill as a means of completing a mission,"Bulletstorm" takes that premise to the next level by having players "kill with skill."

The new first-person shooter from Epic Games, People Can Fly and Electronic Arts ends up being a campy, over-the-top offering, featuring a new game play style that awards points for killing enemies in unique ways. The more outlandishly someone dies, the more skillshot points you get.

You play as Grayson Hunt, an assassin-turned-mercenary who is on a mission to redeem himself by going after the people who used him to kill innocents.

Sound convoluted? There are enough twists, turns, betrayals and unlikely partnerships that it feels like you will end up targeting everyone at some point in the game.

That mounting body count, which is the game's true lead character, isn't just about using different weapons to off your opponents, but includes using the environment around you to deal death blows.

Players can cash in the points for upgrades to weapons and a special device called the Leash. It's a wrist device that shoots out an energy tendril, allowing Hunt to pull enemies or items toward him.

You can also use the Thumper feature of the Leash to fling people into the air, where you can pick them off and earn "Trap Shooting" points.

Hunt starts off the game with a standard assault rifle, but other weapons are found throughout the scenes.

My favorite ended up being the Flail Gun, which fires off two bombs attached together by a chain. Wrap up an enemy, kick him into a crowd of bad guys, and then set off the bombs. It clears out a room quickly and will earn you points for the "Gang Bang" skill or the "Grenade Gag" skill.

Get the idea? The more creatively a player uses his weapons and surroundings, the better his weapons become and the more destructive he can be.

Instead of just mowing down enemy after enemy, I found myself taking a few extra moments to survey what was around me and how I could use it to destroy others.

The wanton mayhem isn't the only thing that's over the top in "Bulletstorm." Dialogue is one obscenity after another in some of the most outlandish ways. Obviously, they are all NSFW (or for any real conversation), but they are laugh-out-loud funny if you keep your tongue firmly in your cheek.

There are also indicators along the way (like a message telling you to press "B" to kick open a door) that lead the player by the hand through the linear game play.

Single-player maps can be replayed after completion to see if you can improve your skillshot score in a timed setting.

Multiplayer action ramps things up by introducing three team members to destroy the bad guys with you.

The play is the same, but team skillshots are introduced to add a bit of spice. Cooperation is needed to move along, so play with people who will work with you rather than go off on their own.

"Bulletstorm" is an entertaining attempt at making bloody fun with the skillshot feature.

I think of it as a teenage shooter game that tries to get attention by being gross, obscene and sexually charged. It is funny at first, but after a while, it becomes tired -- especially the dialogue.

But the shooting aspect is really something new and does keep interest levels high. Even toward the end of the game, I was still figuring out new combinations of weapons and environment that unlocked more new skillshot points.

"Bulletstorm" is now available on the Xbox 360, PlayStation 3 and PC. It is rated M for mature because of blood and gore, intense violence, partial nudity, sexual themes, strong language and use of alcohol. This review was done playing a retail copy on the Xbox 360.