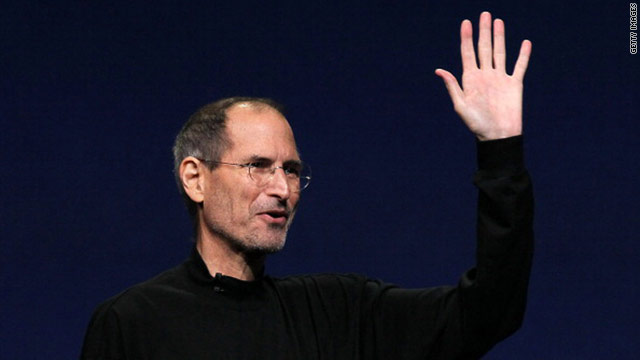 The audience at Apple's event gave him a standing ovation and tech bloggers immediately and breathlessly tweeted out the news.

"That he came out on stage will go down in history as a big deal," said John Jackson, a CCS Insight analyst. "It's a significant gesture."

Jobs was diagnosed with pancreatic cancer in 2003. He had a liver transplant in 2009. On January 17, he took his second leave from the company in the past two years.

Speculation about Jobs' health had increased in recent weeks, with tabloids weighing in with unsubstantiated reports. Some of those rumors were tempered when Jobs was photographed in February attending a private dinner with President Barack Obama and other Silicon Valley elite.

Still, many observers had expected another Apple exec, possibly COO Tim Cook or marketing chief Phil Schiller, to fill in for him Wednesday.

But there was Jobs, looking thin but happy and vigorous. Whatever health concerns prompted his most recent leave didn't seem to affect his flair as an Apple pitchman.

"We've been working on this product for a long time, and I just didn't want to miss the day," Jobs said.

He smiled often throughout his presentation, paced back and forth on stage and cracked jokes about the white iPhone that Apple has yet to sell. He also characteristically took jabs at competitors such as Google, saying Android tablets lack enough apps.

Afterward, Jobs didn't venture out to the demo room, where he sometimes greets reporters and guests who are getting a first look at new products. Apple executives Schiller, Jony Ive and Scott Forstall were there instead.

Several observers noted that Jobs added a black belt to his trademark black-mock turtleneck-and-jeans ensemble, which either makes him a ninja or a man wearing loose-fitting pants.

The Apple co-founder's current leave has sparked concern among his cult-like followers and even spooked some investors. A proposal for Apple to outline a succession plan for its executives failed to pass at a shareholders' meeting at the company's Cupertino, California, headquarters last week. Jobs didn't attend.

But the health of Apple's chief, who runs the most highly valued tech company in the world, is more important to shareholders than it is to most of its customers, said Sarah Rotman Epps, a Forrester Research analyst focusing on personal computing.

Jobs' appearance threatened to overshadow the iPad 2 launch and may alleviate some criticisms that the tablet computer isn't a major upgrade over the original. He said the similar-looking iPad 2 has "an all-new design," among other improvements.

All Things D's Kara Swisher broke the news late Tuesday that Jobs was considering an appearance at the event. "What would be a welcome change in the coverage of Jobs' personal struggles would be to show a level of respect to him by paying more attention to what bells and whistles the iPad 2 has rather than to how his jeans are fitting," she wrote.

"That's the truly dramatic story to watch here, rather than needlessly rubbernecking about the struggles of one man -- albeit, a very significant man -- to regain his health."

Jobs concluded Wednesday's presentation with a touch of sentimentality that also graced his January statement in announcing his medical leave.

"As always, I'd also like to thank everyone's families because they support us and let us do what we love to do," he said.