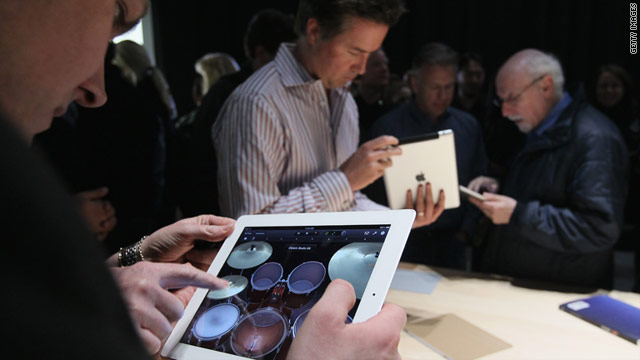 Will you get the new iPad? Tell us about it here.

San Francisco (CNN) -- How is it that a company that's been making electronics in white for at least a decade can't produce an iPhone 4 in that color?

Apple added another layer to that puzzle Wednesday, when it announced that the iPad 2 would come in both white and black models.

Sure enough, in a demonstration room after the announcement, attendees at Apple's event found a feast of test units in both colors. Flash back to June 2010, when Apple escorted reporters into a room, nary a block from here, filled with iPhone 4s fashioned in both black and white.

Needless to say, Apple has yet to sell the most recent iPhone model in a color that's not black. The older 3G and 3GS iPhones came in models with white backsides.

Apple CEO Steve Jobs, who unveiled both products, made a nod to the iPhone flub at Wednesday's event.

"We'll be shipping white from Day One," he said with emphasis, to laughs from the audience.

At least two key factors have prevented Apple from shipping a white version of the newest iPhone on Day One and even still on Day 251, Apple employees said.

Apple co-founder Steve Wozniak uses a white iPhone 4, which he says he assembled from parts made by a Chinese supplier and deemed to be defective by Apple. The device takes poor-quality photos when the camera's flash is used, and the white materials make the proximity sensor less reliable, he said.

"The early parts Apple made were defective. So Apple decided not to put them out," Wozniak said in an interview with Engadget. "I took a picture with flash and without; the one with flash was ... like I took it through cellophane."

These design obstacles affect the latest version of the iPhone. The iPad 2 has a camera on the back, but its backside is made of aluminum, not of the white casing used on the front, and doesn't have a flash.

The new tablet computer also lacks a proximity sensor. That mechanism in the iPhone is used to detect when, say, it's pressed against an object, usually your head, to tell the display to turn off during a call. (Previous iPhones weren't affected because every version had a black-colored front.)

Instead of a proximity detector, the iPad 2 uses magnets embedded within the hardware to determine when Apple's Smart Case has been applied to the screen, thus telling the screen when to turn on and off. Ambient light sensors, which are also in iPhones, tell the device to adjust the screen's brightness.

Apple first announced a delay for the white iPhone on the day before the product's launch in June, saying it would be available in the second half of July. Then in July, Apple said the elusive white phone was coming later that year. Then in October, Apple again pushed its release to spring 2011.

Despite its mythical nature, the white model has not only become a grail for geeks, like Wozniak, willing to void their warranties and screw in some foreign parts. It's also a sort of status symbol around Apple's Cupertino, California, campus.

Jony Ive, the company's principal hardware designer, was seen tapping away on his white iPhone 4 in the product demonstration room after Wednesday's iPad 2 unveiling.