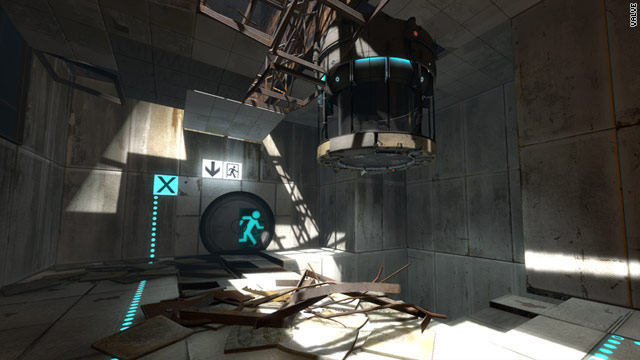 Welcome back to the test chamber: "Portal 2" reunites players with GLaDOS. The cake, however, remains a lie.
STORY HIGHLIGHTS

The much-anticipated sequel expands on and improves the original's dark humor and mind-bending puzzles while providing a story that twists, turns and answers questions previously unasked.

A follow-up to the 2007 surprise smash hit "Portal," the game, released Tuesday by Valve, puts you back in the test chambers at Aperture Laboratories many years after the events of the first game end.

You play again as Chell, a female test subject who has been in stasis for many centuries and once again finds herself trying to escape from the treacherous lab.

This time, you're aided early on by a robot ball named Wheatley, who wants to get out as well.

However, you are eventually reunited with GLaDOS (Genetic Lifeform and Disk Operating System), the homicidal computer from "Portal" that you presumably destroyed but is now seeking revenge -- in the name of science.

Game play once again features a series of platform-based puzzles that require the use of the portal gun to traverse.

The gun fires two types of portals that allow the player to get to hard-to-reach places.

Not every surface can be used as a portal, so proper selection of targets is key to advancing in the game.

The Weighted Storage Cube and Companion Cube, a small box with hearts on the side, are back to help with weighted triggers.

There are also Redirection Cubes that contain lenses to deflect laser beams, or Thermal Discouragement Beams as they are called in the game's deliciously ominous double-speak.

The puzzles require logical thinking and are smartly done. If you didn't play the first game, "Portal 2" does start with some basic puzzles to help you understand how the game's physics, mechanics and portals work.

But the difficulty ramps up quickly after a few test rooms. There are some new elements to help work out the puzzles.

"Aerial Faith Plates" launch you and other objects around the room and often help in adding momentum, which is sometimes critical to get to hard-to-reach places without a portal.

Liquid gels become available later in the game; they provide some useful abilities.

A blue gel helps Chell bounce, and an orange gel boosts her speed.

A white gel can be used to cover walls or floors that normally can't be used as portals, allowing one to be created. There are puzzles that will require one, two or all three gels to complete.

All of these additions to the puzzle-solving make for a very intelligent game. It is often best when entering a new room to stop, take a look around and analyze the scene. Be sure to look in all directions, because the way out may force to you to go in a different direction than the obvious one.

The story is fantastic, and the writing and dialogue remain one of the cornerstones to this series. GLaDOS's voice is dripping with sarcasm and malice even as her tone remains soothing and calm. Wheatley is silly, frantic and almost childlike.

The humor remains dark and dangerous, as it was in "Portal." GLaDOS often lies about pressing concerns or dangers, then admits her lie and seems to revel in the deception.

Without giving away any story spoilers, the game is pretty much divided into three parts and introduces the CEO and founder of Aperture Science, Cave Johnson. Johnson was heard in promotional videos for the game and has a sarcastic, shoot-from-the-hip attitude that just adds to the great dialogue found throughout "Portal 2."

The single-player version takes about six to eight hours to play depending on how fast you can solve the mind-bending puzzles. But the action doesn't stop there.

"Portal 2" offers a co-op version for two players, each operating a robot with a portal gun. GLaDOS puts Blue and Orange, the two bots, through test rooms much like Chell had to experience.

It is truly a cooperative game that can't be mastered by just one person. The puzzles are more complex, since they do require cooperation, but the devices and mechanics remain the same as in single-player mode.

Orange and Blue can communicate by using indicators to suggest what needs to be moved or where a portal should go.

They can also gesture to one another for a wave, a hug or even a high-five after a job well done. A random partner can be found online, but it is infinitely more enjoyable to play with someone in the same room or with a friend.

These puzzles can take some time to solve if you've never seen them before, and a friend might be more willing to cut you some slack as you analyze your options.

There is no drop-in or drop-out during co-op play. If one player leaves the game, the session is disconnected, creating another reason to play with someone you know.

GLaDOS keeps up the sarcasm but, if possible, shows even less empathy for the robots. Her dialogue, of course, remains funny and brutal.

Xbox 360 players can play each other across the Xbox LIVE network. Steam, the online gaming platform, is supported on the PlayStation 3 as well as PC and Mac computers, so players on those platforms also can play co-op with one another.

"Portal 2" was released Tuesday morning, although a Steam promotion gave gamers the chance to play the game Monday night by purchasing a package of independently produced games.

Overall, "Portal 2" is a sublime game from start to finish, with humor, wit, intelligence and drama carried over from the debut title. The action remains fresh and original, and the dialogue spurs spontaneous laughter even in the deadliest situations.

And in case you were wondering ... there is no cake.

"Portal 2" is available now for the Xbox 360, PlayStation 3, PC and Mac. The game is rated E10+ due to fantasy violence and mild language. This review was done playing the single-player version on Xbox 360 and the co-op version on PS3 and PC (through Steam).