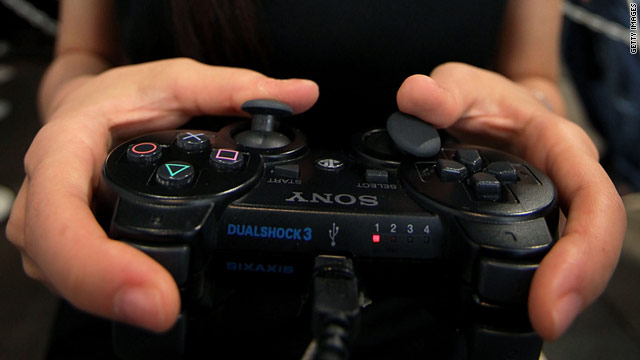 Gamers can't wait to get their hands back on PlayStation controllers.
STORY HIGHLIGHTS

(CNN) -- For many gamers, recent news stories about potential security breaches, lost data or lifted financial information were missing the most basic, most important point: When do I get to play again?

Sure, gamers could play locally, off-network -- as in "by yourself." But that can be a little like playing tennis "by yourself." Which potentially (if not inevitably) leads to heat exhaustion, sun poisoning, and never being able to track down where all the fuzzy little balls went.

And, to some, it seemed like Sony wasn't terribly forthcoming about what had happened or, during those first few days, that anything significant had happened.

Those observations appear to have crossed the minds of Rep. Mary Bono Mack, R-California, and Rep. G.K. Butterfield, D-North Carolina.

The PlayStation Network breach affects millions of potential young voters, so Congress got into the act, asking Sony to do some explaining. In a letter to its chairman, a House subcommittee on Energy and Commerce asked why Sony waited so long to notify customers about the breach.

Reps. Bono Mack and Butterfield asked how they could be confident credit card information wasn't stolen and if Sony knew the identity of those responsible.

Or, to paraphrase their letter:

"Dear Sony,
Come on, when do we get to play Portal 2?
Later,
Congress."

Sony has said that the network will be up this week. And here we are on Thursday afternoon, with no game.

Until the network is back up and running at full strength, how are gamers dealing with the outage? Reading? Pointing PS3 controller at their televisions and muttering, weeping? Practicing knife kills on mall security while clutching rubber spatulas?

"PS3 people always talk about their hardware being better," said Mike Pascuzzi, a 27-year-old gamer from Houston. "So for all the Xbox people, this is hysterical to them. I've got a PS3 and an Xbox, so I'm in both camps. But, you see now why Xbox Live service costs money. It has that added security-- that's part of what you're paying for. It's more secure, so it's more safe."

Courtney Nawara works in the gaming industry and lives in Tampa, Florida. In her home she plays on a PS3, Xbox360 and a Wii.

"Some games play better on one system or aren't available on another," she said.

"Viva Pinata is only available on the Xbox360. Portal 2 seemed like it would be better on the PS3 as opposed to the Xbox360. The Wii seemed like a good idea at the time, but it hardly gets touched ever."

Nawara is still a fan of Sony but is waiting for some answers from the tech giant.

"I'd love to know how easy it was for Sony's security to get compromised, how much credit card information was leaked and how far back it goes," she said. "Like was my information from when I played Everquest over seven years ago still stored in their system?"

As impatient gamers from all over the world wistfully pick up their familiar, even comforting, ergonomic PS3 game controller, many are asking the same question Nawara is: "I'd also love to know what Sony is doing to prevent this from happening again."

From his Los Angeles home, Andrew Walker said he's frustrated by the PSN outage and has been spending more time on Microsoft's system.

"I just wish my Xbox didn't sound like a helicopter taking off when I switch it on," he said.

Walker feels a big part of Sony's job will be getting the network back up. Another big part? A type of digital mea culpa tour.

"Sony does need to figure some form of grand gesture back to their customers," Walker said. "What with SOE being hacked as well, this could be a lingering black mark against their reputation. I honestly don't know what it will take, but they may want to look at how Apple handled the iPhone 4 antenna debacle."

(Geek Out! contacted Sony for a comment on this article but as of this publishing the company has not responded. However they have responded to Congress with a letter.)

When the PlayStation Network does come back online, it'll be coming up slowly, not all at once.

Tina Tynda, the founder of Girls on Gaming, doesn't need the freebies.

She said she's sticking with PSN because no matter how hard they firewall an open network, there will always be some amount of vulnerability.

"No personal information stored online is ever 100% safe, if someone wants it bad enough. I'm still a fan of Sony's PlayStation Network, though," she said. "I've never had the 'Red Ring of Death' on my PS3."