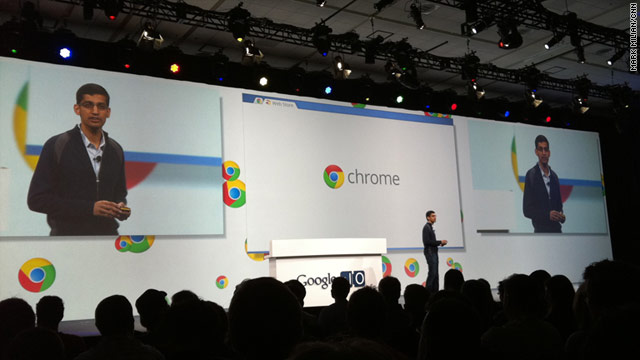 Google announced Wednesday it will rent its Chrome laptops to corporations and schools for as little as $20 a month.
STORY HIGHLIGHTS

Samsung Electronics will sell a version with a 12.1-inch screen and Wi-Fi for $429, and another model with Verizon Wireless 3G connectivity for $499. Acer will also make a Chromebook with prices as low as $349.

Google will also lease the laptops to corporations and schools, a deal that includes the hardware, support services and management software, executives said at the company's annual I/O conference here on Wednesday. Monthly subscriptions will start at $28 per user for businesses and $20 per user for schools.

The new operating system is based on Google's Chrome Web browser but adds some extra features for connecting digital cameras and offline usage. Google says 160 million people actively browse the Web using Chrome, up from 70 million a year ago.

Because the laptop runs on a stripped-down system, first-time setup takes three minutes, and the computers boot up in 8 seconds, Sundar Pichai, an executive for the Chrome group, said during the presentation.

"Chrome is tremendously valuable to Google," Pichai said afterward in an interview with reporters. "It serves as a platform for some of the most important applications we provide: Gmail, Google Maps, et cetera."

The notebooks will run Web-based apps and store files in the cloud instead of on a hard drive. "Your apps, games, photos, music, movies and documents will be accessible wherever you are and you won't need to worry about losing your computer or forgetting to back up files," Google said in a blog post announcing the computers.

The Chromebooks will go on sale next month at Best Buy and on Amazon.com in the United States, Google said. On the same day, the laptops will also be available in France, Germany, Italy, the Netherlands, Spain and the UK. Google launched the Chrome Web Store, which is a directory and marketplace for web apps, in several new countries on Wednesday, encompassing 41 languages.

In the current economic climate, Google and its business partners may have a tough time launching a new brand of netbooks -- the portable, lightweight and inexpensive computers that thrived during the recent economic downturn.

Stacy Smith, Intel's financial chief, told CNET recently that it hasn't seen an increase in demand for its processors optimized for netbooks. Microsoft observed in its recent earnings call that netbook sales have declined dramatically in the last few months, a far cry from their surge in 2009.

But in addition to the consumer market, Google sees significant revenue potential in providing combination hardware-software packages to businesses, where Microsoft makes a great deal of its money. Chrome OS, in many ways, is a direct challenge to Microsoft.

"I don't think there's anything inherently wrong with Windows, and Windows 7 has some great security features," Google co-founder Sergey Brin told reporters on Wednesday. "Chromebooks are a new model that doesn't put the burden of managing your computer on yourself."

He added: "Companies that don't use that model, I don't think will be successful."