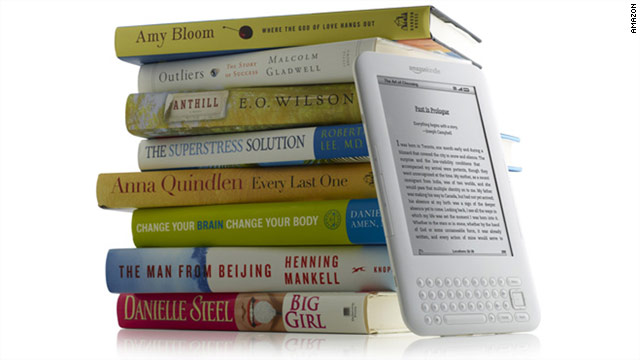 (CNN) -- As further proof of how digital media dominate today's entertainment, Amazon announced Thursday that its customers now buy more e-books for its Kindle device than all print books -- hardcover and paperback -- combined.

Given that people seem to spend more and more of their time peering at glowing electronic screens, this was probably bound to happen.

Still, the swiftness of this sea change -- three-and-a-half years after the Kindle hit the market -- appeared to catch even Amazon by surprise.

"Customers are now choosing Kindle books more often than print books. We had high hopes that this would happen eventually, but we never imagined it would happen this quickly -- we've been selling print books for 15 years and Kindle books for less than four years," said Jeff Bezos, Amazon's CEO, in a statement.

Of course, these stats only represent sales of books on Amazon.com, the only place consumers can buy e-books for the Kindle. When sales of books from other websites and brick-and-mortar stores are factored in, e-books still represent a small minority of all titles purchased, although some analysts predict they could reach 20% within a year or two.

The growth of electronic books has been a bright spot in an otherwise struggling publishing industry. Sales revenue from e-books were up 145.7% in March of this year compared with March 2010, according to the Association of American Publishers. At the same time, adult hardcover sales increased 6%, while mass market books -- less-expensive paperbacks -- grew by 1.2%.

Consumers wanting to read books electronically can now choose from many competing devices, including Sony's Reader, Barnes & Noble's Nook, and a variety of touchscreen tablets, including Apple's iPad.

Amazon has repeatedly slashed the price of its Kindle e-reader, which now costs $139 (or $114 for a model loaded with on-screen ads.) The Web retailer said it has sold more than three times as many Kindle books so far in 2011 as it did during the same period in 2010.