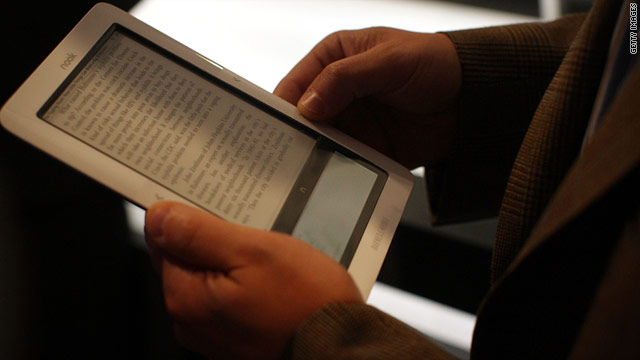 It's certain that both e-readers have insane battery life compared to any other kind of gadget.
STORY HIGHLIGHTS
RELATED TOPICS

(WIRED) -- Amazon and Barnes & Noble are duking it out over the respective battery lives of the Kindle and the new touch-screen Nook.

The field of battle is the ghostly ground of press releases and promo-page blurb, and the last word seems to have been had by B&N.

After B&N laid out the specs for its new e-reader, Amazon took issue with the numbers, saying that B&N's claim rested on usage tests of just a half hour of use per day, with wireless switched off.

Amazon's usage tests assume an hour of use per day, also with wireless switched off. So what did Amazon do? It simply doubled the battery life on the product page to reflect a half-hour daily usage. Sneaky.

B&N countered with a very detailed statement, outlining the exact tests made. It also looks like the Kindle was also tested in the same way:

"With up to two months on a single charge, the all-new Nook has the longest battery life in the industry and superior battery performance to Kindle 3. In our side-by-side tests, under the exact same conditions, continuous use of the device resulted in more than two times Kindle's battery life.

"While reading at one page a minute, the all-new Nook battery lasts for 150 hours, where the Kindle battery, using the same page-turn rate, lasts for only 56 hours (both with Wi-Fi off). "

I love that B&N calls 150 just "two times" 56, when it could easily say "almost three times." That shows some confidence.

However this works out, it's certain that both e-readers have insane battery life compared to any other kind of gadget. And if you're basing your decision on this spec alone, instead of depth of catalog and ease of use, then you're probably looking in the wrong direction.