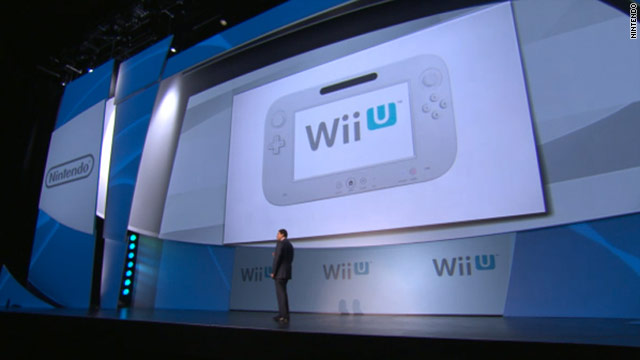 Nintendo wants to pitch the Wii U as a game system for Me and You and all of Us to play Together.
STORY HIGHLIGHTS

(CNN) -- In the tech world, new product names are always mocked relentlessly for at least a day or two.

Remember when the Apple iPad came out in 2010? In the first few hours of that now-successful device's release, all we could talk about was the name, which everyone thought sounded more like a feminine hygiene product than something you wanted to touch.

Now the Wii U is running through a similar -- although less icky -- gantlet as people rush to blogs and to Twitter to mock this mishmash of pronouns.

Some jokes the next product would be called "We U They."

"I imagine the 'U' is not for 'University,' " tech writer Omar Gallaga tweeted.

"Wii U is a great name when you realize that a U is a connected roman numeral II," another Twitter user wrote.

Then some took the long view: "Wii U is a silly name, but just like the Wii, I'll get used to it. The controller looks awesome though," another Twitter users said.

The company explains itself by throwing as many "u's" out into the universe as possible: "Is it unique, unifying, maybe even utopian?" asked Reggie Fils-Aime, president of Nintendo America. "The answer is also yes to all of this."

Perhaps some substitution will help. Wii = We. U = You, of course.

So Nintendo wants to pitch the Wii U as a game system for Me and You and all of Us to play Together in the same room, or also by Ourselves.

The Wii U remote has a screen on it that can be used in conjunction with the game that's playing simultaneously on the television.

More on that in our story about Nintendo's press conference.

As for the name: U b the judge.