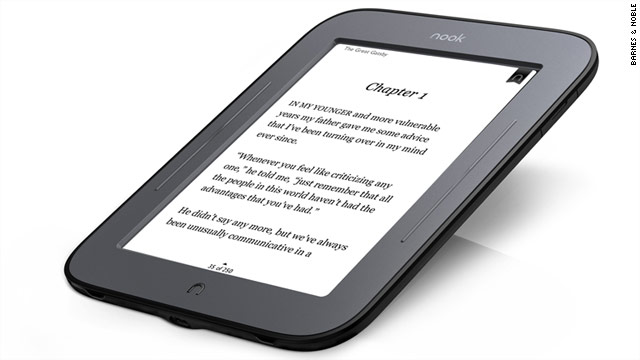 Barnes & Noble's new Nook is stripped down from the original and has won favor from Consumer Reports.
STORY HIGHLIGHTS
RELATED TOPICS

(CNN) -- The new Nook is barely better than the Kindle.

So said Consumer Reports on Friday, marking the first time the esteemed product-review group has given Barnes & Noble's e-reader higher marks than its competitor from Amazon.

Apparently, more is less for Consumer Reports. The Nook Simple Touch Reader, released last month, scored one point higher than the latest Kindle and a few points higher than other models.

That's more than the Nook Color, released about a half-year ago, could muster. (Amazon does not offer a color Kindle -- at least not yet). The new Nook, which we've called the anti-iPad, strips away bells and whistles from the first model, including a second navigation screen, an MP3 player and web browser.

"B&N has caught up with the Kindle in large part by emulating Amazon's focus on reading with minimal fuss and extra features," reviewer Paul Reynolds wrote for Consumer Reports.

Consumer Reports scored the Nook and Kindle the same on battery life, with each testing out at over five days on a single charge, and prices (both come in around $140 for Wi-Fi-only models).

The reviewers called the first version of the Nook glitchy, saying that it had apparently been rushed out for the 2009 holiday season. Friday's review said updates to firmware, the small computer programs that run the device, have improved both the new model and the older one.

The review said that Amazon's Kindle -- unconfirmed reports say a color version is in the works -- has a chance to leapfrog the Nook again in future tests. One of the things that earned the Nook extra points is a program that lets users check out e-books from libraries for free.

Amazon has announced it will add a library program later this year. The review also said future Kindle firmware updates could give it a boost.

Consumer reports said that it's waiting to test one more e-reader, the Kobo eReader Touch, and that a new line of Sony Reader devices is expected later this year.