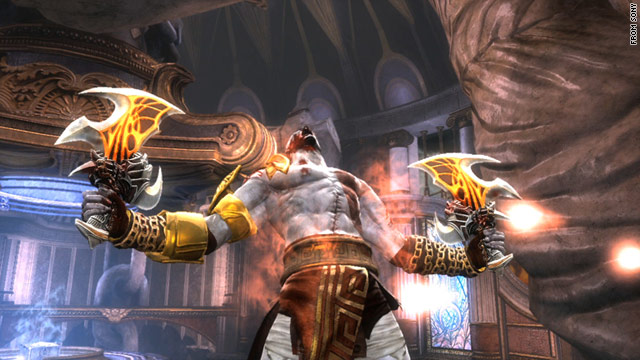 The "God of War" games from Sony are considered violent, but the Supreme Court says such games still have protection as art.
STORY HIGHLIGHTS

(CNN) -- Maybe it helps for the nation's highest court to say it, too?

Video games are art, and they deserve the exact same First Amendment protections as books, comics, plays and all the rest, the U.S. Supreme Court said Monday in a ruling about the sale of violent video games in California.

California had tried to argue that video games are inherently different from these other mediums because they are "interactive." So if a kid has to pick up a controller and hit the B button -- over and over again until he starts to get thumb arthritis -- to kill a person in a video game, that's different from reading about a similar murder, the state said.

The high court didn't buy that argument, however.

Interactive stories are "nothing new," Justice Antonin Scalia wrote in the majority opinion (PDF). "Since at least the publication of 'The Adventures of You: Sugarcane Island' in 1969, young readers of choose-your-own-adventure stories have been able to make decisions that determine the plot by following instructions about which page to turn to."

Here's more on why the court thinks video games are art:

"Like the protected books, plays, and movies that preceded them, video games communicate ideas -- and even social messages -- through many familiar literary devices (such as characters, dialogue, plot, and music) and through features distinctive to the medium (such as the player's interaction with the virtual world). That suffices to confer First Amendment protection."

That's all well and good. But the most fun to be had in this potentially dry court opinion is when Scalia starts writing about how gory old-school stories are, too. He's trying to make the point that stories have included violence for as long as there have been stories.

The examples are pretty hilarious:

"Grimm's Fairy Tales, for example, are grim indeed," he writes.

"Cinderella's evil stepsisters have their eyes pecked out by doves. And Hansel and Gretel (children!) kill their captor by baking her in an oven."

And, finally, if that wasn't enough eye-related violence for you:

"High-school reading lists are full of similar fare. Homer's Odysseus blinds Polyphemus the Cyclops by grinding out his eye with a heated stake."

Like these stories, this whole debate of whether video games -- violent or not -- classify as art has been raging in the tech world for years, if not decades.

It appears that much of the feud has been settled as of late, as CNN's Doug Gross wrote from the E3 Expo this month in Los Angeles.

"Keep debating whether video games are art if you wish. At E3, the world's biggest gaming expo, it's a closed question. Here, video games are definitely art -- and a gallery-style exhibit aims to prove it to as many people as care to look," Gross wrote at a gallery showing of video game art.

The Smithsonian is on board with this idea, too. That bastion of culture and history plans a similar exhibition, called "The Art of Video Games," in 2012.