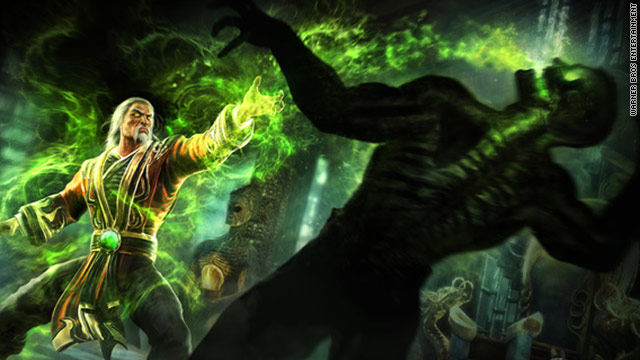 "Mortal Kombat" has spawned an entire stable of sequels, like this year's reboot, but was controversial at first.
STORY HIGHLIGHTS

(CNN) -- This week's ruling by the U.S. Supreme Court that a California law banning the sale of violent video games to kids went too far is just the latest in a long string of headline-grabbing moments in gaming history.

Unfortunately, at least as far as mainstream audiences are concerned, those headlines often center around violence in video games, particularly focusing on how that violence affects children.

To be sure, there's plenty of content in video games that's not for kids. Virtually everyone agrees on that, and there's a ratings system in place to help parents decide which games are appropriate and which ones aren't.

The ratings, like those at a movie theater, provide guidelines and create rules for game retailers. (California's law would have judged games differently though, making it a crime if a retailer doesn't follow them.)

But even the current ratings system was born out of controversy. And, as games get more graphic and complex, it hasn't stemmed the tide of complaints about some titles.

In light of this week's rulings, here's a look at 10 video games that sparked controversy with their violent content -- and what it was that made them so polarizing.

At this point, it's downright quaint.

But when it hit arcades more than three decades ago, "Death Race" (based on the cult movie "Death Race 2000") may have been the first video game to spark controversy for its violence.

In the chunky, black-and-white pixilated graphics of the time, players ran down "gremlins" in their vehicles. The targets squealed and cried, and were then replaced by tombstones on the screen. It didn't help when word leaked that the working title had been "Pedestrian."

It was enough to prompt the National Safety Council to call the game "morbid" and earn it a spot in a "60 Minutes" segment on violence in games.

The '90s classic has spawned innumerable sequels that have found themselves pretty well in the middle of the pack in terms of fighting-game violence.

But when it hit arcades in 1992 and home consoles the next year, "Mortal Kombat" jumped out because of its realistic, digitized graphics -- and the gore they depicted.

Brandishing severed heads, ripping out hearts and spines and the like helped put "Mortal Kombat" at the head of a pack of games that prompted hearings in Congress and, eventually, led to the creation of the Entertainment Software Rating Board.

The gore also helped it to become one of the most popular video games of all time.

This year's reboot (often called "Mortal Kombat 9") does its best to uphold the tradition. Options include eating an opponent's head, pulling out their stomach after spitting acid down their throat and slicing them in half with a buzzsaw.

From the same gaming class as "Mortal Kombat" came "Doom." 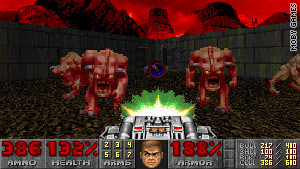 "Doom" was the first time many people had seen a first-person shooter game.

It might not have been the original first-person shooter game, but "Doom" certainly popularized the style. And there was something about seeing the violence from the viewpoint of the shooter that really got to folks.

There was also blood and gore, shotguns and chainsaws. And when it emerged that the shooters in the 1999 Columbine High School tragedy were avid "Doom" players, it was pretty much assured that the game would move to the forefront of the controversy of the time.

If any one game inherited the mantle of violent game poster child from "Mortal Kombat" and "Doom," it was "Grand Theft Auto."

The game was controversial from its very earliest incarnation because it let players do just about anything as they portrayed criminals.

But it really ramped up with 2001's "Grand Theft Auto III," when improved graphics made the chaos even more realistic. Players could kill police officers, hire (and subsequently kill) prostitutes and perform any number of other unsavory acts.

In 2003, the family of two shooting victims filed the first of what would become several lawsuits against the series. That case was quickly dismissed.

When Konami released it in 1999, no one had seen anything quite like "Silent Hill." A creepy survival shooter, it took horror-movie style visuals to a new level, complete with cut scenes that included disemboweled and crucified bodies. 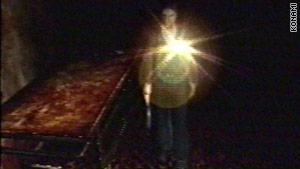 "Silent Hill" and its sequels use music, sound and sight for a horror-movie feel.

Future installments in the series kept it up, using music, sound and visual advances to boost the creepiness factor.

For the original, a monster called "The Grey Child" -- a small, naked creature encountered near a school -- had to be redesigned before the game could be released in North America. The monster was eventually taken out of the European release altogether.

The game, in which the player goes on a rampage as "The Postal Dude," was cited by California's lawyers as an example of why a law was needed. Since Monday, the game's creators have celebrated the ruling as a victory for free speech.

But while other game creators try to reflect or explain away criticism, the makers of the "Postal" franchise have wallowed in it. To be honest, their offering is pretty much what the harshest critics see in their heads when they imagine violent video games.

Abusing and killing cats. Killing people who cut ahead of you in line at the bank. Urinating on the corpses of victims. All are allowed, and much more.

(And if you forget exactly how much your character has urinated throughout the game, don't worry. Its scoring system will keep track for you, in gallons, right alongside stats like "Number of People Murdered," "People Roasted" and "Heads Exploded by Shotgun").

In a move that probably seemed clever to someone, you can even kill people protesting against violent video games. Get it?

"Postal 2" was referenced repeatedly by lawyers when the California case was heard by the Supreme Court, particularly a scene in which the player can slam a woman in the face with a shovel until she's decapitated.

The game was banned in Australia and, in what we'll call another condemnation of sorts, is featured in the Black Eyed Peas video for "Where is the Love?"

Let's be honest; Nintendo's Wii didn't become the best-selling console in the world appealing to hardcore fans of hack-and-slash-and-shoot. 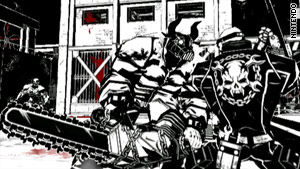 "MadWorld" caught flak for being on the family-friendly Wii console.

But "MadWorld" was an effort to reach out to those folks and break away from the Wii's largely family-friendly lineup.

When we say the violence in "MadWorld" is cartoonish, we mean it literally. Think "Sin City." The concept is straight out of a cartoon as well; you're on a game show in which you earn points for slaughtering people.

"The release of MadWorld for the Wii brings violent video games to a once family-friendly platform," Dr. David Walsh, president of the National Institute on Media and the Family, said in a press release at the time.

The response from the guys over at Kotaku: "Hopefully, though, concerned parents will notice the 'M for Mature' rating on the cover, just to the left of the dude wielding a bloodied chainsaw."

"Bioshock" was a massive hit with gaming critics, and for good reason.

It is visually sumptuous, thought-provoking and puts the player in a mind-bending, futuristic world that has gone very, very wrong.

None of that kept the complaints from coming, though, when word got out that the game gives players the chance to kill little girls for in-game rewards.

OK, so technically they're little mutated monsters that used to be girls. But, still. ... 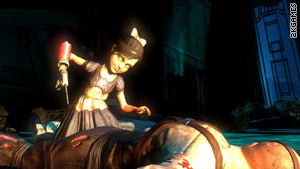 "Bioshock" players face a moral dilemma: Kill the creepy "Lilttle Sisters" or try to save them.

The "Little Sisters" got the game all sorts of media attention that had nothing to do with its multiple awards. The game's creators said the criticism oversimplified what they were trying to do.

"What we want to do is create a game which deals with moral shades of grey and doesn't try and patronize us with two-dimensional cutouts -- like a Disney take on what is right and what is wrong ...," Irrational Games' Joe McDonagh told gaming site IGN. "I hope very much that people do focus on that with the Little Sisters and not try and reduce it to something that I really don't think it is."

The level of violence in the massively popular "Call of Duty" title is probably what any experienced gamer would expect from a combat title.

But it was the nature of that violence that turned heads. Set in the "near future," the shooter puts the player in firefights in Afghanistan and, at least once, lets them join forces with terrorists. One scene puts the player in the position of deciding whether to join in as an ally guns down innocent civilians in an airport.

In fairness, that mission, called "No Russian," is optional and players are warned of "disturbing content" beforehand. But plenty of mainstream-media critics condemned it, particularly with its release coming around the time of the November 5, 2009, shootings at Fort Hood, Texas, that killed 13 people.

In Japan and Germany, the game was altered to end if a player killed civilians.

This one created a bit of a row earlier this year and may speak, in its own way, to what the dialogue on violent video games can devolve into.

Before it was even released, the website for a certain cable news channel (hint: not this one) ran a story under the headline "Is 'Bulletstorm' the worst video game in the world?"

"The damage could be significant," if a child plays the game, one psychiatrist said in the article (which does not say whether the psychiatrist had seen the game).

Another told the site that an "increase in rapes" could be attributed to sexual scenes in video games like "Bulletstorm." Significant detail: There is no sex in "Bulletstorm." (Sexually suggestive language, yes. Sex, no.)

To be sure, "Bulletstorm" revels in a stream of nonstop profanity and rewards grisly "skill kills" that include impaling opponents on a cactus and chopping them in half. But the worst game in the world?

"I think of it as a teenage shooter game that tries to get attention by being gross, obscene and sexually charged," CNN.com video-game contributor Larry Frum wrote in March. "It is funny at first, but after a while, it becomes tired."