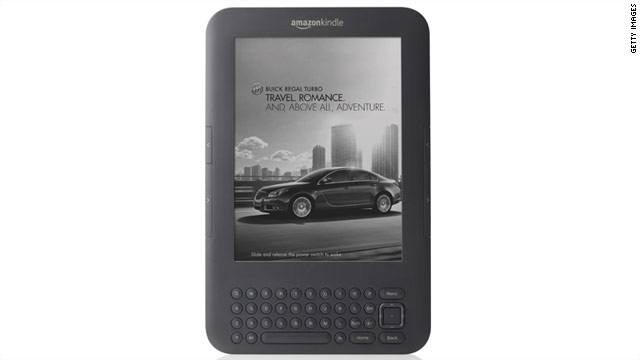 In exchange for a cheaper price, users see ads and special discount offers as the Kindle's screensaver module.
STORY HIGHLIGHTS

(CNN) -- Amazon's recent ad-supported Kindle isn't just the future of e-readers. It may also be a look at the future of how people buy electronic gadgets: with a reduced price, subsidized by advertising.

In exchange for the cheaper price, users see advertisements and special discount offers as the Kindle's screensaver module -- samples here -- instead of the standard Kindle screensaver, which is illustrations of authors. Amazon is not putting ads in Kindle books themselves.

The results, so far: People seem willing to expose themselves to ads in order to save some money on the price of a Kindle, particularly on the lower end.

In dozens of checks of Amazon's "Bestsellers in Electronics" page, the ad-supported, Wi-Fi-only Kindle is consistently the best-selling overall Kindle, followed by the no-ads version. The 3G version is less consistent: Sometimes, the ad-supported version is listed as selling better than the standard version; sometimes it's not. (Perhaps this is a reflection that the discount, percentage-wise, isn't as big for the 3G version.)

While the $25 discount isn't huge, it's a start. It's going to be a while before Amazon knows how much of an ad-driven discount it can offer on future Kindles, based on advertiser interest for special offers, how many offers the average Kindle owner purchases, etc.

Customers recently reported seeing specials for Olay Regenerist beauty products and Amazon camping gear. Many of the specials are for Amazon-owned properties, ranging from Kindle accessories to Audible audio books. (An opportunity for Amazon to increase their sales, potentially further increasing the Kindle discount they can offer.)

In the bigger picture, this is a pricing model that could potentially appear across the electronics industry, wherever there's room in a product or service for digital advertising.

For example, by now, Google likely has an idea of how many ads Android smartphone owners will see and tap on over the lifespan of a phone, via Google searches, ads in games like "Angry Birds," and so on.

Perhaps Google will eventually subsidize Android phones -- using some of that potential ad revenue -- to better compete with Apple's iPhone or other smartphones. (Mobile phones are already heavily subsidized -- sometimes by hundreds of dollars -- by your phone company, in exchange for signing a two-year contract. But so far, advertising doesn't play a role in that.)

Similarly, new, Internet-connected TVs could soon provide room for digital advertising within menus or applications. Perhaps Samsung, for example, may be able to lower its prices in exchange for showing you an ad while your TV is booting up, or while you're waiting for the Netflix streaming app to load.

Heck, even some new refrigerators have LCD screens with Internet connections. Would you turn your kitchen appliances into mini-billboards in exchange for lower prices?

For this model to work, companies should follow Amazon's lead: Don't be too intrusive or annoying, don't over promise, and try to make the advertising seem like more than just advertising.

Amazon's special offers are sort of a membership into a special deals "club." (That's a concept that companies like Groupon and Gilt have designed particularly well: Getting people to think of ads as content or a club, and not just ads.)

The discounts will have to start small so no one gets surprised. But eventually, they could grow.

And, of course, not everything is going to be sold like this. Many people are put off at the thought of dealing with more advertising in their daily lives, so there will always be some consumers who will spend more money to be ad-free.

But as mobile and digital advertising evolves, and as wireless connectivity becomes more ubiquitous, we can expect to see more ad-subsidized gadgets, and not fewer.

As long as the deals are good, and the financial equation works out, this business model could become widespread.

The opinions expressed in this commentary are solely those of Dan Frommer.