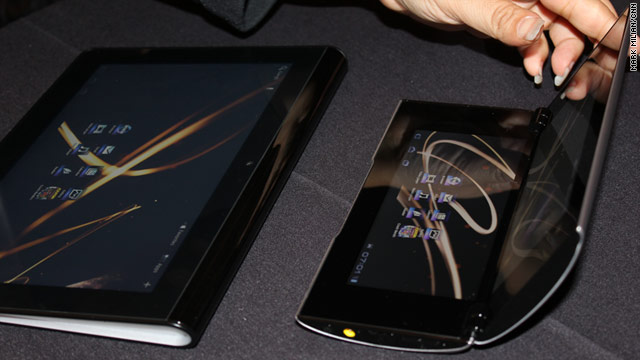 San Francisco (CNN) -- A tablet computer doesn't have to look like a flat rectangle.

For its entry into the U.S. tablet market, Sony Electronics is forgoing that common design, popularized by Apple's iPad. The Japanese company's upcoming tablets look and feel more like folded magazines and a pair of sunglasses than the parade of rectangles on the market now.

The first Android tablet, the S1, looks like dozens of other tablets at first glance. But the back has a "wraparound" curved lip that's supposed to feel like a magazine does when it's folded over. In a brief test Wednesday, this design felt more natural than some models with flatter backs.

The second, the S2, resembles an oversize sunglasses case. The rounded metallic gizmo can be flipped open like a book to reveal two touchscreens, each measuring 5.5 inches diagonally.

The split-screen display is appropriate for reading books, and Sony will include a version of its e-book software that's optimized for the device. But the S2 "will coexist" with the dedicated monochrome-display e-readers Sony sells, said Phil Molyneux, president and operating chief for Sony Electronics.

The S2's clamshell design -- an old idea that has been resurrected from the flip-phone era -- is intended to make the S2 more portable, Molyneux said.

"There's not many actual other products that you can actually fit in your pocket today unless you make your pocket much bigger," Molyneux said.

To which Molyneux said: "This will show you a whole page of the Internet."

The S2 will be sold jointly with AT&T Mobility and can connect to AT&T's faster cellular data network. The S1 will only be able to connect to the Internet through Wi-Fi networks.

Sony's pair of tablets run Google's Android operating system. They will debut sometime in the fall, Sony executives said. The company plans to disclose information about pricing and release dates closer to their debut. The names of these devices also could change in the next few months.

Sony will face mounting competition from new entrants. Tablet-industry newcomer Toshiba launched the Thrive this month, and Samsung Electronics, an early contender, continues to roll out tablets in a variety of sizes.

Sony is targeting a more status-minded customer with these devices, similar to Apple's with the iPad, executives said during the news conference.

But the electronics giant may have difficulty conveying the differences to customers. The "distinct advantages" of Sony's tablets that executives were touting are its hardware design, software tweaks for making Web pages load faster and touch responsiveness quicker, and integration with Sony's Qriocity multimedia streaming services.

PlayStation Suite, video-game software currently deployed on Sony Ericsson's Xperia Play phone, will be pre-installed on these new tablets. But Sony will not be targeting diehard game players.

"This is for the casual gamer," Molyneux said.

The tablets can also be programmed to work as television remote controls and entertainment hubs. A feature called Throw allows users to flick the screen, when playing a movie, to transfer that video wirelessly to a TV, similar to Apple's AirPlay.