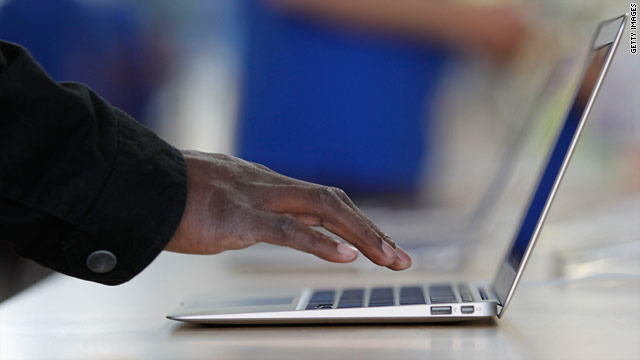 Ultra-portable notebooks like Apple's MacBook Airs are ditching the optical drive so they can achieve a slim silhouette.
STORY HIGHLIGHTS
RELATED TOPICS

(WIRED) -- Our notebooks, ultrabooks and desktop PCs are all getting thinner -- thin enough that Kate Moss in her heroin-chic heyday could have sported something like the 13-inch MacBook Air down the runway and it wouldn't have overwhelmed her almost nonexistent frame.

It's no surprise. We've been seeing computers slim down ever since those giant room-sized computers that spawned the digital age, and the introduction of the first PCs in the decades that followed.

But for a while, we were continually adding features such as hard drive space, optical drives, SD card slots to our notebooks and PCs.

Now, as storage migrates toward online servers, and media is more likely to be streamed rather than viewed from a DVD or Blu-ray disc, many of those onboard features are shrinking down, or getting nixed altogether.

Consumers are favoring size and portability over a heftier 'do-it-all' type machine.

"Size will most certainly be an important driver when consumers look for their next PC or notebook," especially with tablets at the forefront of consumers' minds todays, says Desiree Davis, Senior Manager with Resolve Market Research.

The skinny: In recent years, we've been seeing ultra-portable notebooks like Apple's MacBook Airs ditch the optical drive so they can achieve a slim silhouette.

The Mac Mini desktop also lost the optical drive in its latest iteration. And now, both MacRumors and TUAW are reporting that Apple is working on ultra-thin 15- and 17-inch notebooks as well, likely to fall under the MacBook Pro umbrella and hit the market around the holiday season.

If this is true (and it definitely seems in line with Apple's current product trends and general philosophy) and they're as thin as the Airs, they likely won't have an optical drive either.

"There are simply fewer devices on the market that consumers want to carry that have room for hard disk drives. Their value to the on-the-go consumer is simply nonexistent," says Davis.

Although SSDs are currently more expensive than comparable capacity HDDs, they offer more benefits than just their smaller form factor: they are quieter, less vulnerable to physical shock, have less latency, and quicker access time. We're probably going to see them become more and more prevalent in notebooks and PCs.

The materials used to create modern computers and laptops also lends itself towards thinner design, especially in Apple's case.

"The aluminum unibody structures of the new MacBooks (whether Air or non-Air) are significantly stronger than what manufacturers could make out of plastic. So Apple is able to create a super-thin product while still preserving the strength of a plastic counterpart," Miroslav Djuric of iFixit.

Cloud storage is another factor that will allow computers to shed some pounds. There are a variety of cloud storage solutions that customers can use instead of loading up on files on their actual gadget.

With our music, photos, and documents fed into the cloud, the need for onboard storage becomes increasingly irrelevant and unnecessary.

Google's Chromebook, which takes that to the extreme, eliminates almost everything but your ability to connect to the Internet. Although a device like that isn't quite ready for the mainstream yet, it's clear that's the direction we're headed.

But is a thin computer always a good thing?

"The best way to have thin devices is to integrate as many components as possible on one single board," says Djuric. "That really keeps the thickness as minimal as possible, but also affects the upgradeability, repairability, and features of the device."

"These thinner devices also make for excellent throw-way devices," Djuric added. That means consumers are more likely to toss it out when it gets old, rather than trying to fix or upgrade it. This could lead to environmental problems in the future, as these products build up in landfills, he said.