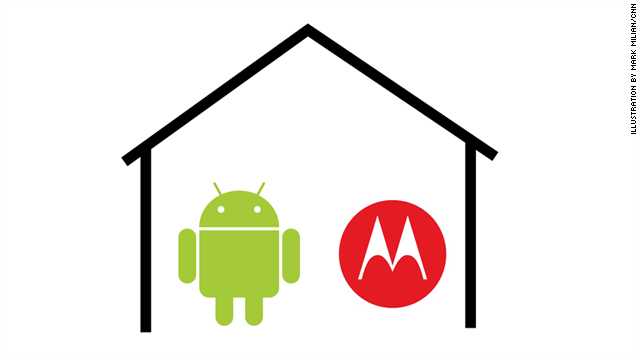 (CNN) -- One lesser-known aspect of Google's proposed acquisition of Motorola Mobility: It brings the technology giant a step closer to offering a Google baby monitor.

Google announced in May its ambitions of getting into the home automation business. Monday's step toward buying a hardware maker is poised to play into that goal.

At the Google I/O conference in May, Google demonstrated concepts for home appliances that could communicate wirelessly with each other and with Android phones and tablets. Google's Joe Britt showed an alarm clock that can be set, using a mobile application, to turn on lights and music in the bedroom at a specified time.

"We'd like to think of your entire home as an accessory," Britt said then. "Android is the operating system for your home."

In addition to providing software, which is where Google's expertise lies, the technology giant is looking to design connected hardware and appliances for the home. This could help Google capitalize on a fairly young industry that has yet to break into the mainstream.

In a blog post Monday, Google CEO Larry Page cited Motorola's development of "home devices" as an impetus for working more closely with the manufacturer. Page expressed that same enthusiasm in a conference call later in the day, sentiments that were echoed by Motorola Mobility CEO Sanjay Jha.

With the proposed Motorola acquisition, Google risks straining its relationships with other smartphone makers who rely on Android, wrote Charles Golvin, a Forrester Research consumer product analyst, in an online report. But Google is willing to weather that storm to bolster its Android @ Home initiative, boost its struggling Google TV product and add patents to its defenses, Golvin wrote.

Why the Google-Moto deal may not result in better phones

Google does not build hardware, unless we count the workshop

that about 3% of its employees have access to. The company has instead partnered with device manufacturers for ventures like Google TV or its Google-brand Nexus line of phones.

Google is working with Lighting Science on developing the Android @ Home light bulbs, but it has not announced other partners.

Addressing concerns expressed by many in the smartphone industry, executives for the companies say Motorola will operate as a separate business unit for now, so Google will be free to partner with competing hardware makers. However, Motorola could play a key role in Google's aspirations to move into the home.

Google's Britt promised in May that we'd "hear a lot more about Android @ Home over the next few months." Now, more than ever, we're listening.