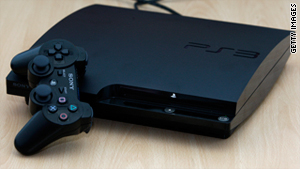 (CNN) -- Sony is reducing the price of the PlayStation 3 game console, hoping to help the 5-year-old system reach a larger audience, the company said on Tuesday.

The base model now costs $250, and another system with twice the storage space is $300. Sony cut $50 from each, which is nearly the price of a new game.

"While others in the space are losing steam, PlayStation 3 is gaining momentum," Jack Tretton, the president and CEO of Sony Computer Entertainment of America, said in a statement. "The new price will make the PS3 more accessible than ever before."

Sony last cut prices on the PlayStation 3 in 2009, when it released a slimmer model. Microsoft has not reduced the Xbox 360's price since 2009, and analysts are split on whether it will do so this year as a response to Sony. The entry-level Xbox 360 costs $200.

Sony's move is seen by analysts as a usual part of a game system's life cycle. Game console generations typically last four to six years, but some predict that motion-detection peripherals like Microsoft's Kinect for the Xbox 360 and Sony's PlayStation Move could prolong the current cycle.

Nintendo announced last month that the successor to the Wii, a tablet-controlled device called the Wii U, will hit the market next year. The news comes as the Wii, this generation's top-selling console, is experiencing a sales slump. Nintendo reduced the price of the Wii from $200 to $150 in May.

Last month, Nintendo cut the price of the 3DS, its handheld game console that displays 3-D graphics without needing special glasses. The 3DS now costs $170, a 40% reduction for a console that's less than five months old. Sales of the 3DS tumbled quickly after a promising launch, and analysts have attributed the proliferation of inexpensive, quick-hit games for Facebook and smartphones as a hindrance to growth in the market for hand-held game systems.

Sony is gearing up for the release of the PlayStation Vita, a portable game console that follows the PlayStation Portable. To compete with smartphones, it will have downloadable games, a touchscreen and 3G cellular data connectivity. The version with 3G will cost $300, and the one without will cost $250.

Sony is still recovering from a nearly monthlong outage that affected its online game networks. The cyberattack, which resulted in stolen personal and financial information, did not seem to harm sales of the console, according to reports. Sony, which has sold more than 50 million PlayStation 3 systems, compensated customers with free game downloads.