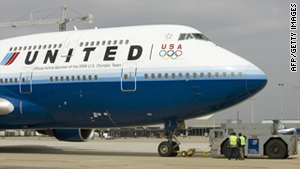 United Continental says it will distribute 11,000 iPads to pilots as a replacement for paper manuals.
STORY HIGHLIGHTS
RELATED TOPICS

(Mashable) -- United Airlines announced Tuesday that it is replacing its pilots' flight decks with iPads.

Rather than carry around 38 pounds of operating manuals, charts and logbooks, the 11,000 pilots at United and Continental will use a pre-loaded iPad. United started distributing iPads to pilots earlier this month and plans to have devices to all pilots by the end of the year.

United joins a growing list of airlines that have started converting some or all of their pilots to using electronic flight bags. Alaska Airlines announced in May its intentions to switch from paper to the iPad. Last week, Delta and British Airways started testing the use of iPad and other consumer tablets as replacements for traditional paper flight bags.

According to United, moving away from paper to the iPad will do more than increase efficiency and improve safety:

"Each iPad, which weighs less than 1.5 pounds, will replace approximately 38 pounds of paper operating manuals, navigation charts, reference handbooks, flight checklists, logbooks and weather information in a pilot's flight bag. A conventional flight bag full of paper materials contains an average of 12,000 sheets of paper per pilot. The green benefits of moving to EFBs are two-fold  it significantly reduces paper use and printing, and, in turn, reduces fuel consumption. The airline projects EFBs will save nearly 16 million sheets of paper a year which is equivalent to more than 1,900 trees not cut down. Saving 326,000 gallons of jet fuel a year reduces greenhouse gas emissions by 3,208 metric tons."

Electronic flight decks will allow pilots to update their materials instead of waiting for printed distribution, and the decrease in weight will also be easier on a pilot's luggage.

See the original article at Mashable.com