At 20, Linux is invisible, ubiquitous 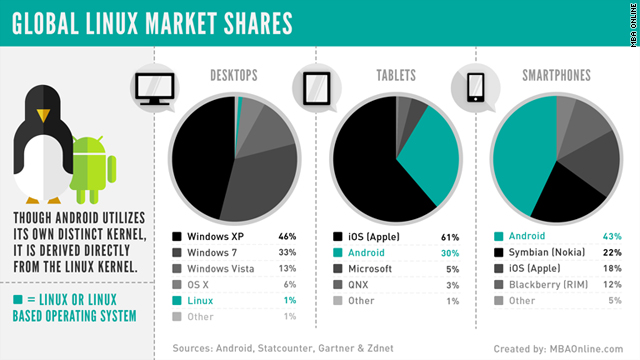 Linux-powered software is growing quickly in emerging industries, as depicted in this CNN infographic from MBAOnline.com.
STORY HIGHLIGHTS

San Francisco (CNN) -- Ross Turk would be happy to explain the tattoo on his arm.

By now, he's used to the penguin being met with bewildered stares. It represents, as he'd tell you, the Linux computing software, not the slightly less obscure character from 1950s cartoons.

"A lot of people see it and they think it's Chilly Willy or something," the West Hollywood, California, man lamented in a recent interview. "The Linux logo is still kind of grass-roots."

When the then-21-year-old Turk got the logo etched into his left bicep in 2000, the penguin seemed poised to become mainstream, then appearing frequently in magazines and on the walls in computer stores. But the software market tumbled with the dot-com bust, and so too did the Linux brand, choked by investors' swift rejection then of the open-source software movement.

Thursday marks 20 years since Linus Torvalds announced on a Web bulletin board that he'd begun working on a free computer operating system. In that message, Torvalds described Linux as "just a hobby, won't be big and professional."

Now, two decades later, that market breakthrough doesn't seem any more attainable. And yet while the Linux name and its penguin mascot failed to go big, the software they embody is more pervasive today than ever.

Linux's skeleton and spirit live on inside another familiar, adorable mascot: the green robot that represents Google's Android operating system. That software, which powers 43% of smartphones worldwide, many tablets and the Google TV set-top boxes, was developed with Linux at its core. Google's Chrome OS for laptops is also based on Linux.

Another mobile system, webOS, sprouted from Linux. Hewlett-Packard says webOS, not the hardware that runs it, is a key asset from its acquisition last year of Palm. This month, HP took steps to discontinue its gadget production arm, but it will keep webOS. HP has discussed licensing the software to other vendors in order to expand webOS's reach, perhaps into computing platforms on appliances and in cars. 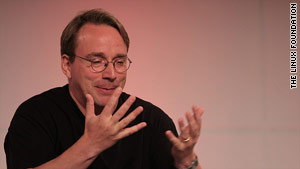 Linux is already commonly installed on refrigerators with built-in TVs, car navigation systems, in-flight entertainment systems, public transit displays, ATMs and countless other machines. The Smart TV from Samsung Electronics, which competes with the Google TV, is also based on Linux. Sony previously allowed tinkerers to install versions of Linux onto their PlayStation consoles.

Whether you're aware of it or not, Linux is practically everywhere.

"The fact that you don't have to call it Linux is what makes Linux work," said Jim Zemlin, the executive director of the Linux Foundation. His nonprofit organization was formed to promote Linux development to the industry and sponsors Torvalds' ongoing work on the platform.

Linux can exist in so many places because, rather than being owned by one company, thousands of engineers contribute code to the kernel. (The kernel is the brains and sinew of the software, and Torvalds said in an e-mail that it's the aspect of his work that he finds most interesting and that he spends most of his time developing.)

No one can claim ownership of Linux, and everyone is free to use it. The software contains 14 million lines of code and is protected by more than 520,000 patents, according to a Linux Foundation report. Governments like the system's flexibility and decentralized nature.

Technology companies, even giants like Intel and AMD that typically don't publish schematics for their other products, encourage staff to contribute to and implement code from Linux. Google has carried this philosophy into many parts of its business, though not the ones that make the most money. The company did not respond to a request to make an executive available.

Torvalds initially conceived of Linux as a free alternative to Windows. But the collaborative-development, peace-loving ideologies of Linux were no match for the freewheeling, business-savvy, marketing power of Microsoft.

Linux, as a PC platform in the home, showed promise during the boom a decade ago. But it never came to fruition there, even as Apple's Mac has emerged as a more serious player.

Instead, Linux became the bastion of geek morality, the king of the fast-growing server industry where Microsoft and Apple also compete with limited success, and the choice platform for supercomputers in laboratories.

In Microsoft's annual report filed last week to the U.S. Securities and Exchange Commission, the software giant revised its statement on competition to declare the war with Linux over. Microsoft no longer perceives Linux as credible competition to Windows, the change suggests, as ZDNet notes.

However, Torvalds isn't ready to forfeit the PC.

"I'm definitely not indifferent to the desktop market," Torvalds wrote in an e-mail. "The desktop is a very 'sticky' environment: Users really get attached to their environment."

Several Linux players are still tackling that market, but their efforts amount to only about 1% of desktop usage worldwide. Microsoft controls the lion's share. Microsoft has been very adept at ensuring that Windows comes as the default operating system installed on most new computers.

"Usage isn't what matters; mindshare is what matters," said Jono Bacon, a community manager for Ubuntu, the most popular general-purpose version of Linux. "The biggest challenge we face right now is getting preinstalled on hardware."

You can't even fly on an airplane ... you can't use Facebook, you can't buy a book from Amazon, without running into Linux.
--Alan Clark

SUSE, which makes another Linux desktop platform, and others have been choked by Microsoft's "strong monopoly on the desktop," said Alan Clark, the chariman of the board for the openSUSE Project.

"It's played out differently than I expected, to be honest," Clark said. "We made some progress, but nothing like anybody envisioned."

Yet, SUSE has a comfortable presence in the server market, Clark said.

"Linux is very much pervasive. It's everywhere. You can't even fly on an airplane; ... you can't use Facebook; you can't buy a book from Amazon," Clark said, "without running into Linux."

The cult of Linux

Familiarity with Linux became a crucial skill for budding software engineers and server caretakers as far back as the mid-1990s.

When David Bohnett sought a partner in his new Web venture called GeoCities, resulting in one of the largest Internet business deals ever when it went public and then was acquired by Yahoo for $3.6 billion in 1999, his main criteria was an adeptness with Linux programming, Bohnett said in an interview. John Rezner fit the description and shared in the pair's eventual fortune.

Torvalds, the brain behind Linux, never seemed very interested in fortunes, according to people who know him. The reclusive programming wizard declined through a spokeswoman to be interviewed by phone, though he talked openly through e-mail and appeared on stage last week at LinuxCon in Vancouver, Canada.

There, Torvalds was treated like a celebrity. A lover of reclusive scientists, including Sir Isaac Newton and Albert Einstein, he described the general reactions from Linux fans as "just odd." He wrote: "Sometimes it does get to be a bit overwhelming."

Clark, from SUSE, described a memorable meeting with Torvalds.

"The first time he came to Japan, seriously, it was like a rock star arrived, and I could kind of tell it was really overwhelming for him," Clark said. "He took it in stride."

The Linux faithful are predominantly male, often nerdy, with strong principles about collaborative development that translate to a belief in a less hierarchal, more cooperative society, according to interviews. For example, Ubuntu's Bacon has an Android phone, which uses Google's open-source software, because "the ethical side of me feels like it's the right thing to do," he said. "It's not just a product. It's an ethos."

Apple has tried to define its principles in advertising: artistic, noncorporate and able to "think different." Its brand has been adopted by millions of people.

Meanwhile, Linux has maintained a devout but small following over the last two decades. The Linux software is embedded in many millions of machines, but its ethos and the penguin logo that embodies it remain an underground movement.

To let Turk explain it, because he'd be more than happy to, his tattoo is like a secret handshake, waiting for someone to be able to recognize and reciprocate.

"Every so often, at the gym or something, I'll run into someone who's like, 'That's the Linux tattoo,' and there's a conversation," said Turk, who now works for open-source software maker Talend. "It's always been something that the community feels like it owns. It's almost a little bit anti-establishment. The penguin doesn't stand a chance against the marketing of big firms. But that's great. It's good. It's ours."