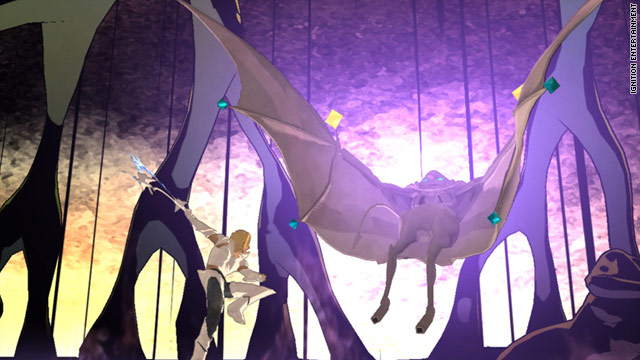 Developers hope players will look beyond the game and find out more about the Biblical story after playing "El Shaddai."
STORY HIGHLIGHTS
RELATED TOPICS

Plenty of video games use mythical gods or other characters and creatures from beyond to drive their stories.

But notably absent, at least among mainstream titles? The Bible. At least until now.

"El Shaddai: Ascension of the Metatron" (Ignition Entertainment) is based on the Old Testament figure Enoch, a man originally written about in the Book of Genesis who, according to the story, is taken to heaven without dying.

In the apocryphal Books of Enoch, which appeared in the Ethiopic Bible, he becomes the chief of the archangels and protector of heaven's treasures.

In "El Shaddai," Enoch is a priest who attempts to stop seven fallen angels from destroying the world. Ignition's director of business development, Shane Bettenhausen, said there have been plenty of games set in other kinds of mythologies, but "El Shaddai" developers wanted to tell a different story.

"We felt there was some value in presenting this story modernizing it and basing a game on it, because it does have a good template of hunting down these fallen angels, bringing them back to face justice in Heaven."

Bettenhausen said the company made the story a new retelling of the Books of Enoch while being very careful not to step on the toes of believers.

The game is not being released in Ethiopia, the only place where the Books of Enoch are considered canon.

"There is nothing in there that will offend anybody, but there is a lot of content that will make traditional Western Christians wonder about this version of Genesis and where these (game) characters relate to the characters they know," he said.

Developers hope they challenge players to look beyond the game itself and find out more about the original story.

"It is a slippery slope but one we aren't afraid of," Bettenhausen said. "We aren't doing any faith-based marketing."

Released in Japan in April, the game became an instant hit with fans of Japanese animation who appreciated the art style and movements. Early release trailers were shared, fan groups were formed, and gaming conventions in Japan saw groups of cosplayers (fans who dress as their fictional favorites) as characters from "El Shaddai."

"We were blown away because rarely, in Japan, do you get a hardcore fans contingent even before the product is available," Bettenhausen said. "In ComicCon in San Diego (in July), we did have cosplayers. It was really cool to see it happening (in the U.S.)."

Anime fans have been drawn to the game by the development work of Takeyasu Sawaki, who was also a character designer for "Okami" and "Devil May Cry." Bettenhausen said the anime style lends itself to be more colorful, creative and expressive, which was perfect for the "El Shaddai" style of surreal and wacky.

Female players have also been drawn to the game. In Japan, nearly half of the fan base is female, a surprising development since many girl gamers don't go for action-adventure-type games.

"Because of the characters, the story and the art, girls and women really gravitate towards (the game)," Bettenhausen said. "Here in America at the conventions, hard-core female gamers and casual female gamers were coming up and playing a game they normally wouldn't play."

He acknowledged that they were concerned about producing an original title in the "year of the sequels" in gaming. But because the story was original and it appeals to male and female gamers, developers think they can make their mark and stand out from the crowd.

"What's really going to surprise you about 'El Shaddai' beyond the graphics, which are weird, and the story, which is unlike anything you've ever seen, is the moment-to-moment experience," Bettenhausen said. "Enoch doesn't know what to expect, and the player definitely doesn't know what to expect. By the end of the game, you've experienced multiple different game-play styles."

"El Shaddai: Ascension of the Metatron" is rated T for Teen due to animated blood, fantasy violence, and mild suggestive themes. It is available now in Japan and North America, and on September 9 in Europe for the PlayStation 3 and Xbox 360.