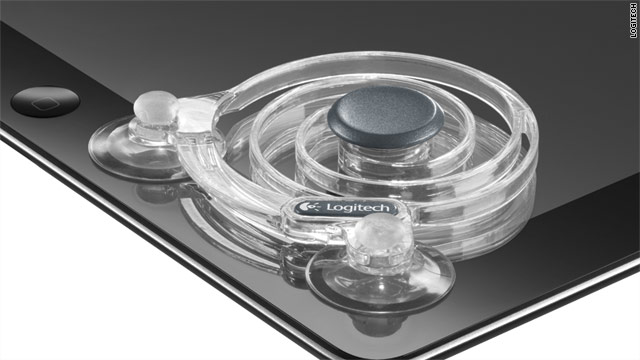 (CNN) -- Need proof that the iPad and other tablets are geared toward playing games? Now they've got their own joystick.

Logitech has leapt into the gadget-accessory fray with a tool it claims will help you avoid a poorly aimed rocket blast or a pass that sails over your wide-open receiver in the end zone.

The Logitech Joystick is clearly aimed at making the gaming experience on the iPad closer to what gamers have come to know and enjoy on more dedicated gaming devices.

"No one likes to lose a point or go down to defeat because their thumb misses the control area," the company says on its Web page for the $19.99 gadget.. "The Logitech Joystick gives you a thumb-stick style game controller for iPad that you can use with just about any game with an on-screen joystick or d-pad."

The joystick attaches to the iPad screen with suction cups, letting the user move it around depending on the game. A coiled spring keeps the stick centered.

The site lists 32 games that the joystick is currently compatible with. That list is heavily weighted toward sports games and shooters that made a splash on traditional gaming consoles before being reworked for the iPad.

More casual titles like "Cut the Rope" and "Fruit Ninjas" are nowhere to be seen, a likely nod to the fact that many of those games require swiping at multiple spots instead of being focused largely in one place.

The Wall Street Journal notes that the product is part of an increased focus on tablet accessories by Logitech, which has struggled somewhat as Apple's ascendance has hurt its PC-accessory trade.

CNET noted that the joystick, which is available for pre-order and set to ship in September, looks similar to the already available Fling Joystick, which performs a similar function and is offered at the same price.