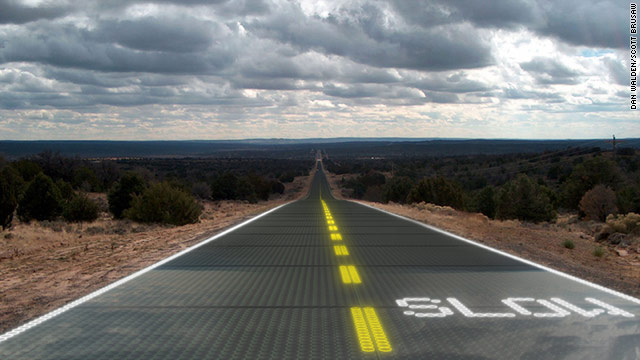 (CNN) -- The mayors of New York and Atlanta, Georgia, suffered stinging criticism for their handling of recent winter storms, but in the near future, technology could clear city streets of ice and snow -- by simply melting it away.

Scott Brusaw, a 53-year-old electrical engineer in tiny Sagle, Idaho, thinks he has a solution. So far, he's generated interest from the federal government and General Electric in his idea for a solar-powered roadway made from super-strong glass, instead of conventional asphalt or concrete.

Bloomberg on snow: Not business as usual

Solar cells inside its glass surface would allow the roadway to act as a giant solar power generator, fueling embedded heating elements and making plows and other snow removal equipment unnecessary.

Are you snowed in? Share your stories, photos and videos

The heating elements would work "like in the rear window of your car," said the inventor, who intends to experiment with temperature settings during the next stages of the development process.

Electricity generated by the highway could be used to recharge electric vehicles and to power lights and LED warning signs along the road itself.

In fact, Brusaw believes that solar roadways -- if widely accepted -- could eventually generate clean electricity around the world, eliminating the need for fossil fuels and saving the planet from global climate change.

Brusaw is not alone in his quest to build a smarter road surface. On the other side of the country, at Massachusetts' Worcester Polytechnic Institute, civil engineer Rajib Mallick has a vision of his own. 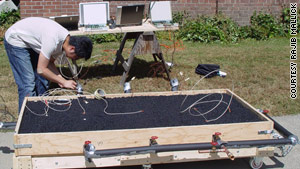 Worcester Polytechnic Institute is trying to tap into the energy potential of asphalt.

With help from a grant from the National Science Foundation and the Massachusetts Technology Collaborative, he and a group of colleagues are working to develop stronger, heat-absorbing pavements.

One idea is to embed the pavement with half-inch pipes filled with a fluid that resists freezing. In warmer weather, sun-heated fluid is stored in an insulated chamber, where it stays hot. Then, in cold weather when it's needed, that hot fluid is sent through the pipes to melt ice and snow.

"Think about it, we have more than 3 million miles of highways exposed to sunlight, so if we can harness this energy, it's free, and you don't need photovoltaic solar cells," said Mallick. 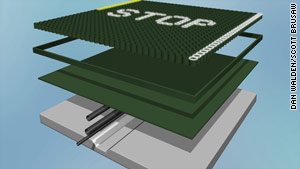 "We have to stop thinking of pavements as separate from buildings," he said. "They can depend on each other as parts of a efficient system to cut energy use and costs and move toward construction of environmentally sustainable buildings and pavement."

Even a warm weather city like Miami, Florida, could benefit from temperature-regulated pavements. The Worcester project estimates that every 50 meters of pipe embedded in Miami pavement would cost $12,500 to construct, $1,000 a year to maintain and would yield enough annual energy from its heat to power 55 homes for a month.

In six years, the smart pavement would pay for itself in energy production and savings, according to research by Mallick and his colleagues.

Smart pavements offer potentially impressive savings in other ways. Alaska spends an estimated $1,600 per mile on annual repairs to ruts in roadways. Controlling the pavement temperature can prevent much of this rutting damage, Mallick said.

Three FAQs that Brusaw gets

For Brusaw, the biggest opposition so far can be summed up in a word: "Change," he said. "It scares people, I think."

-- How can glass provide enough traction while supporting the weight, wear and tear of a conventional concrete or asphalt highway? Glass, especially when fused together in layers, is stronger than most people think, said Brusaw. He said he's joined forces with top glass researchers at University of Dayton and Penn State who can develop super-strong glass that would offer vehicles the traction they need.

-- How much would the solar highway cost? Brusaw calculates an estimated cost -- in great detail -- on his website. Short answer: each mile would cost $4.4 million. Payoff? A cleaner, self-sustaining highway that would eventually pay for itself in energy production and in other ways, he said.

Building and maintaining "better, faster and smarter" roads to improve safety, increase taxpayer value and to remain competitive in the global economy are some of the reasons behind the Federal Highway Administration's commitment to innovation, said agency Administrator Victor Mendez.

The FHWA gave Brusaw a $100,000 contract and the agency is supporting other smart road research across the nation. Virginia Tech is looking at using machines called piezoelectric generators to convert the weight of truck traffic on pavements into energy that powers nearby lighting signals.

Another FHWA program at the University of Nebraska Lincoln will research how hybrid solar- and wind-based generators positioned along roadsides can power highway infrastructure -- and even send extra electricity to nearby communities.

However -- after ideas like these are perfected in laboratories -- the financial and political pathway to the real world will be tricky when state and federal budgets are severely limited, said Robert E. Lang, director of University of Nevada Las Vegas' Brookings Mountain West think tank.

"There aren't a lot of revenue sources to pay for this," said Lang. Justifying the cost of installing anti-snow smart roads would be easiest in areas of high population density, Lang said, where vehicles could be charged fees for the right to use them.

As for Brusaw, he hopes to win more private and federal support by demonstrating a new prototype smart-road parking lot to be finished in the spring.

His goal would be to partner with a high-profile national chain like McDonald's or Walmart to turn their conventional parking lots into solar-powered, interactive, temperature-controlled spaces where electric-vehicle owners can recharge their cars while they shop or drive across the country.

"The Federal Highway Administration told us they're not going to let us go out on the highway to start this," said Brusaw. "They told us to go into the parking lot first, prove your technology, perfect it and learn your lessons there -- which makes sense."