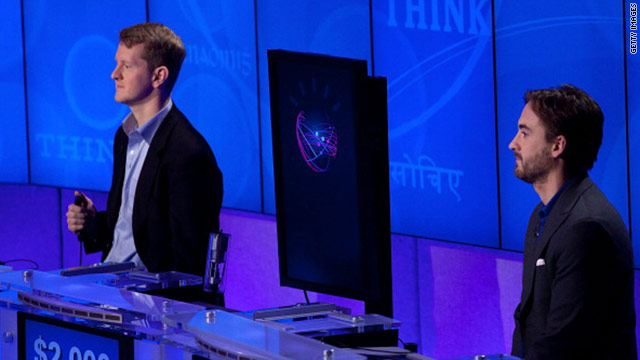 Watson, represented on the set by a black, tablet-like avatar, got 13 questions right before one of his flesh-and-blood challengers (Jennings) answered correctly. The computer nailed answers on an impressive variety of topics, ranging from architecture to biological science to classical music to "Saturday Night Live."

It guessed, "Toronto????." Jennings and Rutter, each a top "Jeopardy!" champ, both got the correct answer: Chicago.

Man vs. machine on 'Jeopardy!'

Still, it was a dominant performance by IBM's massive machine, which has been in development for years and has the processing power of 2,800 "powerful computers." Watson chirped answer after answer correctly, leaving Jennings and Rutter to stand by mutely.

Even when Watson wasn't sure of an answer, as on a question about King Philip of Spain, its closest guess -- as revealed on the TV screen -- was still correct.

The game was spread over two days. Tuesday's rounds were much less competitive than in Monday's opener, which ended with Watson tied with Rutter and $3,000 ahead of Jennings. The third and final Watson episode airs Wednesday night.

IBM trumpets Watson as a major advancement in machines' efforts to understand human language. The computer receives clues through digital texts and then buzzes in against the two other "Jeopardy!" contestants like any other player would.

"I think the only thing this challenge proves is that the computer is faster at ringing in than Brad or Ken, not smarter," posted Tate Hinkle on "Jeopardy's" Facebook fan page.

"Great, you have a multimillion dollar supercomputer that is really good at trivia, now what?" said one CNN.com commenter, dtboco3.

Another commenter, josh101, replied, "The idea of an interface with a computer system that is capable of interpreting human language is something that a lot of people think will be quite remarkable and pave the way for more interactive robots in health care, help desks, defense, and maybe even education."