Part of complete coverage on
What's Next: SXSW

Why South by Southwest matters 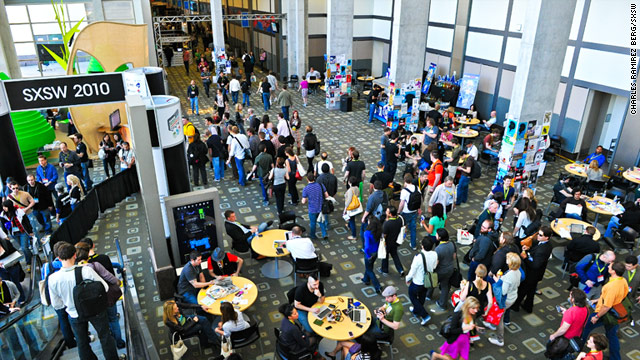 (CNN) -- Every March, thousands of young, jeans-wearing techies, filmmakers and musicians descend upon Austin, Texas, harboring dreams of getting noticed and hitting it big.

They come not just for the balmy weather or the Tex-Mex food but for South by Southwest, a collection of conferences and festivals that's considered one of the most influential happenings on the annual cultural calendar.

Abbreviated as SXSW -- and nicknamed "South by" by festival veterans -- the 24-year-old conference kicks off Friday and runs through March 20. The three-headed event encompasses separate festivals for film, music and interactive technology and has helped launch everything from Twitter to Broken Social Scene.

It's where hipster culture meets geek culture, and where internet entrepreneurs are treated like rock stars.

SXSW first kicked off in 1987 as the place where relatively unknown bands played gigs with hopes of attracting the attention of critics, talent scouts or big-time musicians seeking an opening act for their tours. Conference organizers integrated film and technology segments in 1994 as a "multimedia" event, and a year later, the separate South by Southwest Interactive was formed.

The event's film portion now takes up nine days -- almost as many as the interactive and music sections combined. Past SXSWs have witnessed the premieres of "Kick-Ass," "Knocked Up," and countless documentaries. This year's lineup features such high-profile premieres as a Conan O'Brien documentary about his recent comedy tour (O'Brien's show, like CNN, is a Time Warner property), the Jake Gyllenhaal thriller "Source Code" and "The Beaver," directed by Jodie Foster and starring Mel Gibson.

Within this swirling hotbed of culture are dozens of fledgling internet startups hoping to capture some of the Texas voodoo that helped catapult Twitter and Foursquare early on.

Daytime hours feature hundreds of Interactive panels on everything from "Social TV" to "Has Facebook jumped the shark?" At night, geeks swarm to startup-pitch contests or crowded parties hosted by such names as Bing, StumbleUpon, Hipmunk, Zynga and I Can Has Cheezburger (with pictures of LOLcats on the digital invitations).

Tech-savvy attendees coordinate meeting points with friends on Foursquare or Gowalla, or by using hashtags like "#sxsw" on Twitter.

These nightly events, while expensive to organize, are among the most popular promotional vehicles for young Web companies, which are often happy to dip into their funds to buy out a downtown bar for a few hours. Some hosts, like Gowalla, say SXSW parties are a planned annual expense.

"We did (a party) last year, so we're kind of rehashing that this year -- but bigger and better," said Josh Williams, CEO of Austin's homegrown Gowalla, the location-based, social-networking service that's throwing a 1,200-person bash on Monday. "This is the year I think 'South by' kind of blows up to the point that we're all kind of left with our heads spinning."

Not only do parties help add a new name to people's vocabulary (hey, who's going to Tweet House on Friday?), but organizers also can use them to plant the seed for a product while patrons are lubricated. At a party last year, Drew Olanoff said he talked a lot about an emerging concept called "group messaging" to get audiences familiar with the idea.

"People were like, 'Oh, what's that?' 'Well, it's like reply-all in e-mail,' " said Olanoff, who works for a company called GOGII that develops a group-texting app, textPlus. "Last year was education. This year, we're putting it into action."

Group messaging is expected to be the hot category in social networking this year, according to several industry observers.

GOGII will have staff on the streets near the convention center giving out "respect" stickers. They're hoping to create buzz by getting people to paste stickers on their friends -- a social currency similar to "likes" or "retweets." An advertisement for textPlus is also printed on the stickers.

These guerrilla marketing techniques will be out in full force in Austin. Among TextPlus' many competitors is one called GroupMe, which will be giving away grilled-cheese sandwiches.

SXSW is also where popular app makers launch drastically new versions or websites. Foursquare, Plancast, PicPlz, Ustream and others all plan to release apps with new features this week to coincide with the happenings in Austin.

From CD-ROMs to mobile 'check-ins'

The conference has come a long way since its early years, when it struggled more to get noticed. And its technology has, too.

"In 1994, we were talking about CD-ROMs," said Hugh Forrest, director of the Interactive conference. "At that point, the gulf between the multimedia people and the music people who were attending South by Southwest were like oceans.

"I think that gulf has gotten smaller and smaller as the years go on," he added. "It's still present to some extent. If you're here on Tuesday and Wednesday, the jeans become a lot skinnier, and the tattoos go from sleeves to full-body."

They may not dress the same, but techies seem to have learned some of the musicians' tricks when it comes to promotion and optimism at SXSW. Part of that enthusiasm comes from how integral SXSW was in the histories of two key social networks.

After opening to the public in late 2006, a quirky short-messaging network called Twitter languished in obscurity. But when the small group of employees noticed many of their members were planning trips to SXSW in 2007, they saw an opportunity, said Evan Williams, the company's co-founder and former CEO.

The company paid $11,000 to install monitors in the hallways of Austin's convention center that displayed relevant Twitter messages from attendees, Williams said.

"This was about the only money Twitter's *ever* spent on marketing," he wrote on Quora in January. "And something clicked."

There, Twitter won over a cutting-edge, influential crowd whose increased participation started to weigh on the site's servers, creating an overflow problem that plagued the service for a few years while maintenance played catchup. The excitement carried over to SXSW in 2008, where Twitter again had a major presence.

Then came 2009, when a smartphone-centric service called Foursquare, built around a game of "checking in" at places and competing for the honorary title of mayor, had launched a few days before that year's SXSW. Twitter was by then a ubiquitous tool at the festival, but Foursquare was getting all the hype.

Foursquare had chosen SXSW as the deadline for launching its service and had taken note of Twitter's successes there. In 2010, Foursquare's chief SXSW marketing gimmick involved pickup matches of foursquare, the real-life playground game, outside the convention center.

This year, the company will host a big party and organize more playground games, but SXSW organizers say they've outgrown their location in front of the conference center, Crowley said. Foursquare now has more than 7 million users.

"This year, I don't know what it's going to be," he said. "It should be the year that Foursquare fades into the background. You know, everyone uses Foursquare. What's next?"

After a startup gets its wings at SXSW and the hype starts to fade, it can start to see its presence there as nonessential. Facebook CEO Mark Zuckerberg was interviewed for a 2008 keynote presentation that wasn't well received, and his company has only attended in a small capacity since.

Twitter co-founders Biz Stone and Williams, who was a keynote speaker at SXSW last year, aren't planning to attend the conference, a company spokesman said.

Perhaps as an indication that it has outgrown its role at SXSW, Twitter won't be hosting a party in Austin this year after throwing one last year.

Instead, the company, now with some 200 million users, is organizing a decidedly less debaucherous Twitter Retreat during daytime hours on Monday. "Escape the madness for some R&R," says an event description.

"At some point, the company gets too big, and it just doesn't work," explained Foursquare's Crowley. "This happened to Twitter. I was like, 'Why aren't you guys going?' You just get too big (that) you can't."

For budding tech entrepreneurs at SXSW this week, that would be a good problem to have.