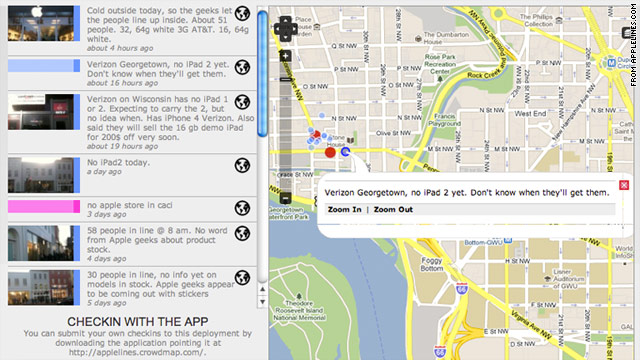 (CNN) -- Making sense of a disaster is about to get a bit easier.

The crowd-mapping platform Ushahidi says it's testing a "check-in" feature that would let people with smartphones upload photos, information and their exact GPS locations to an open-source map.

Ushahidi has made a name for itself in tech and disaster-relief circles for helping compile reports in the immediate aftermath of disasters -- ranging from the Japan tsunami to the Libyan conflict and even U.S. snowstorms.

Relief workers use these maps to rush aid to areas where it's most needed.

The old Ushahidi system relied on a network of volunteers around the globe to comb through reports on Twitter and elsewhere, and then pin then to a map.

By using mobile check-ins, the group could cut out some of that work. The idea is a riff on location-based apps like Foursquare and SCVNGR, which let users share their locations with friends for social reasons.

The first deployment of Ushahidi check-ins is similarly light-hearted.

A group tested the feature during the release of the iPad 2, taking reports about long lines and the like from Washington D.C. Apple vendors.

The effort was a success, Jon Gosier writes in a blog post for Ushahidi.

"So far the check-in feature has gotten us off to a good start, and other than one photo uploading fail, we had no bugs or issues to report," he wrote.

"The feature has saved more than a few friends the time and effort of having to travel or call the store, only to find the model they wanted was not the one Apple got in that day."

"We've already come up with a number of other ideas for check-in deployments, both private and public to make coordination of activities and people easier. We look forward to testing it out more in the future."

Ushahidi first announced its move into the check-in space in December with a mobile platform called Crowdmap. The check-in feature is available for anyone who wants to create an Ushahidi deployment, according to Technology Review.

Ushahidi describes the overall effort as "check-ins with a purpose."

The idea of checking in has been mocked by some, including Gowalla founder Josh Williams, who recently told CNN check-ins for the sake of points are "ultimately going to be empty and unfulfilling."