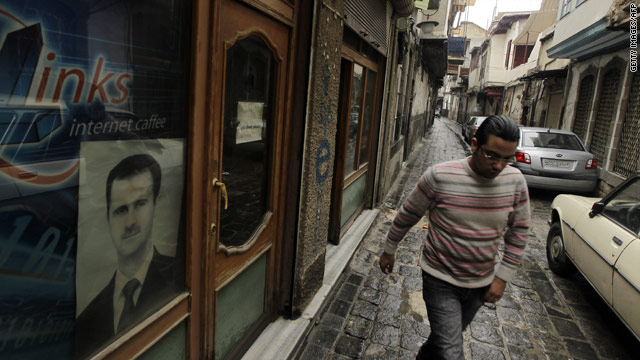 Syria, now in political upheaval, had been going through an internet revolution before protests began.
STORY HIGHLIGHTS

(CNN) -- In the wake of Egypt's "Facebook revolution," which was fueled in part by online social networks, much has been made about the role of technology in encouraging or even creating democracy.

"If you want to liberate a society, just give them the internet," said Wael Ghonim, one of Egypt's tech-savvy revolutionaries.

Syria, the latest country in the region to announce reforms in the wake of protests, is a curious test of that theory.

The country -- squished between Iraq and Turkey -- is known as one of the world's toughest police states. But unlike in Egypt and Tunisia, the government supported the development of local technology, at least before the protests that pushed President Bashar al-Assad on Tuesday to announce the resignation of most of the country's government officials.

The president has not given up power. He addressed the country on Wednesday, blaming the protests on an international conspiracy and calling the situation "a test of our unity."

There are at least three ways to read this fluid situation.

Who is Bashar al-Assad?

Is Syria the regional game-changer?

First: Syria is an exception to Ghonim's theory about internet freedom, since the tools of online revolution have failed, at least to date, to bring about a fundamental change in power in the country. Some scholars say Syria has successfully used the internet to monitor would-be dissidents, keeping them from using the internet to organize.

Second: We're watching another tech-led revolution unfold. The Syrian government reportedly unblocked access to Facebook amid the turmoil in Egypt and Tunisia. Perhaps that was enough to spark recent changes.

Third: The internet has had little impact on Syrian reform. Conflicting reports suggest the internet and some mobile apps may have been blocked recently.

Coming events in Syria will challenge or support these theories.

No matter the outcome, a look at Syria's nascent tech renaissance -- bubbling long before violence in the country started making headlines -- offers a framework for understanding these current events.

Local techies hosted iPhone app development contests; they created websites, including a Syrian version of Foursquare; they went to internet cafes, which are so common "you can't walk without stumbling upon one," one blogger said; they blogged, sometimes under real names; and they used proxy servers to access Western sites and information.

About one in five Syrians is online and nearly half use mobile phones. Those tech penetration rates are only slightly lower than in Egypt.

If internet equals freedom, then these activities should lead to the end of the regime -- meaning internet technology would be something the Syrian government should fear. In reality, however, Syria's ruling party at times supported the digital tools that have spelled disaster for authoritarian regimes elsewhere.

"We're going to see dramatic changes still in the ways Syrians use the internet," one Syrian tech entrepreneur said by phone before protests broke out. "Now (people) feel more comfortable doing this; they're not doing something that is going to be frowned upon. They're not doing it under the table. They're doing it openly."

Many of Syria's tech entrepreneurs seem to have no political aspirations.

In interviews before the recent protests, they were quick to say they're interested in technology for technology's sake.

One Syrian app developer, referred to here as Ahmed to protect his real identity, moved back to the country after going to school in Texas. When he arrived, there weren't many "social" websites or apps to speak of, so he created one.

The reason: He wanted to know the hippest place to grab dinner or a beer with friends. He said he's not the type to dabble in politics.

Syria is becoming a good place for tech entrepreneurs, he said.

"I'm the kind of person who thinks things are getting better here," he said. "There is a change. Maybe it's not as fast as everybody hopes -- but it is happening."

Syrians organized a "Day of Rage" on Facebook, similar to the Facebook event that helped kick off Egypt's revolution.

Unlike in Egypt, where protests raged for 18 days and eventually toppled the 30-year regime of Hosni Mubarak, only a dozen people showed up to that first planned event, which was scheduled for February 4, according to news reports.

Those who did were arrested or dispersed.

Subsequent protests in the south of Syria have attracted more attention and clashes with security police have resulted in the deaths of 73 people, according to Human Rights Watch.

Conversely, tens of thousands of people crowded the streets of Damascus, Syria, on Tuesday in support of the government.

It was soon after that initial February 4 demonstration that the government legalized Facebook, which had been banned since 2007, according to local internet users. Members of Syria's tech elite saw this as a vote of support from the government -- a sign the government trusted people to use social media for personal reasons while keeping their digital hands out of coup-plotting.

People outside the country, however, who are freer to speak their minds without fear of government intimidation, were skeptical of Syria's motives.

"The message is clear: They don't want people talking," said a young Syrian blogger now living in the United States, referred to here as Salam. "Unblocking Facebook and YouTube was just a charade. They wanted to show that they had some confidence and they weren't afraid of such protests going on in Syria."

Evgeny Morozov, an internet scholar at Stanford University and author of "The Net Delusion: The Dark Side of Internet Freedom," put it this way:

It seems, despite Ghonim's claim that the internet will liberate people, technology can be used as tool for both freedom and repression.

Fears of arrest and intimidation have been very real inside Syria.

Shortly after Syria made Facebook legal, the government arrested and four days later released a blogger, Ahmad Hadifa, 28, who allegedly had been critical of the regime, according to the human rights group Reporters Without Borders.

Authorities in February also handed down a five-year prison sentence to Tal Al-Mallouhi, then age 19, who the group says is the world's youngest imprisoned blogger.

Reporters Without Borders puts Syria on its "Enemies of the internet" list for spying on citizens and using digital tools to crack down on dissent. According to The Atlantic, a 50-year-old "emergency law" in Syria "outlaws unofficial gatherings and abets the regular practice of beating, imprisoning, torturing, or killing political dissidents, human rights workers, and minorities."

Watching such events creates a chilling climate of self-censorship, said Salam, the Syrian-born blogger. It's difficult to press the "send" button on anything that could be considered even remotely controversial.

"You're always cautious of what you write. You're always wondering if what you write will get you in trouble," he said. "The Syrian bloggers who were writing about the recent arrests ... had to contemplate things for a few days or a week before posting."

While it may not encourage the open expression of ideas, Syria certainly has encouraged the development of an internet infrastructure.

This is a shift from past practices.

Salam remembers the first time he got online, in 2000, when the Syrian government first decided to let the technology in.

"It's like somebody who got a new toy basically and they were so excited to figure out what they could do with it," he said.

Soon, he had started a blog -- "typos, teen angst, stuff like that" -- from his parents' home in a town in the southern part of the country.

It wasn't long before it was shut down, he said.

"Basically it feels like you were violated when you did nothing wrong," he said. "It was absurd. There was no good reason given."

At least before the recent protests, Syria's president, who has a Facebook page and is the former head of the country's computer society, appeared to see the internet boom as a continuation of Syria's history -- not a tool that would change its course.

"We are the fastest growing internet user in the Middle East," al-Assad told The Wall Street Journal in a rare interview published January 31. "And this is because of the nature of the Syrians: They are very open generally ... They want to learn."

Some Syrians have been geeks-in-training for years.

At age 3, Ahmed, the app developer, used his father's screwdriver to dismantle a radio. Then the family got a VCR -- and he took that apart, too, wanting to see how it worked. "My dad used to lock the drawer where he had all the screw drivers because he was afraid I would do something," he said.

Now he plans to keep building.

He's unsure if his social website will take off in Syria.

But, at least before the recent wave of protests, he was encouraged by how quickly Syria is taking to technology.

Where that tech adoption will lead remains an open question.