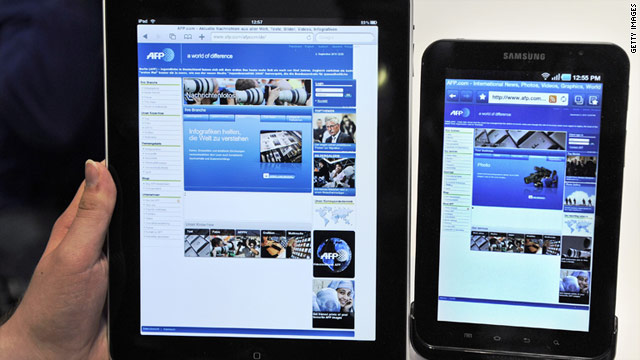 "It's no coincidence that Samsung's latest products look a lot like the iPhone and iPad," an Apple rep said in a statement.
STORY HIGHLIGHTS
RELATED TOPICS

(WIRED) -- Apple says it's sick and tired of Samsung ripping off the iPad and iPhone, and the Cupertino, California, company is filing papers.

In a lawsuit filed Friday, Apple accused Samsung of committing patent and trademark infringement with its Galaxy line of mobile products. That includes the Galaxy S smartphone and the Galaxy Tab tablet.

"It's no coincidence that Samsung's latest products look a lot like the iPhone and iPad, from the shape of the hardware to the user interface and even the packaging," an Apple representative said in a statement provided to All Things Digital. "This kind of blatant copying is wrong, and we need to protect Apple's intellectual property when companies steal our ideas."

Samsung is also a supplier of components to Apple, and manufactures at least some of the A4 and A5 processors used inside the iPhone, iPad and Apple TV, as well as solid-state disk drives used in many Apple products.

Tech giants are already tangled in a number of patent lawsuits filed in years past related to smartphones.

Nokia filed suit against Apple in 2009 for patent infringement, Apple filed a patent lawsuit against HTC in 2010, and Microsoft has gone after Google's partners offering Android-powered products.

In the suit filed against Samsung, Apple contends that Samsung is copying Apple's products on both the hardware and software levels.

For instance, Apple says the Galaxy Tab "slavishly copies" Apple's product design, using a rectangular body with rounded corners, a black border and an array of app icons similar to the iPad's.

Apple also names the Galaxy S, Epic 4G and the Nexus S smartphones, according to a brief report in The Wall Street Journal. The lawsuit filing has yet to appear in the official PACER database.

Wired.com noted last year that the Samsung Vibrant, the predecessor of the Galaxy S, strongly resembles the iPhone.